Sorry, but it’s your fault if you’re offended all the time 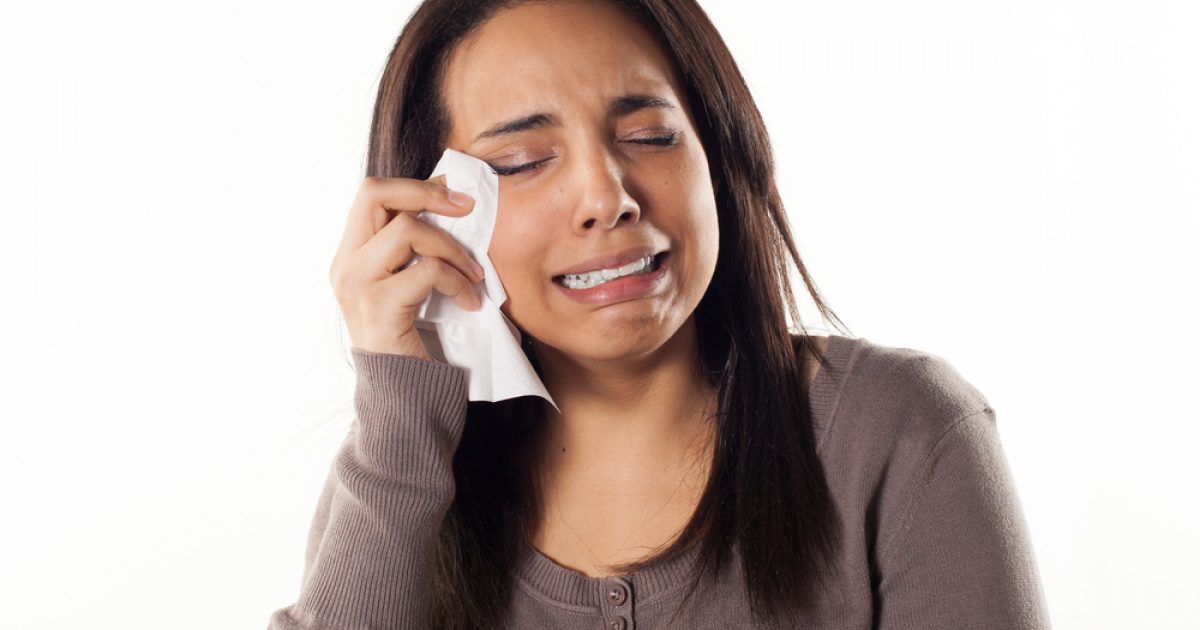 I truly believe that we are the most whiney, sensitive, thin-skinned, easily offended society in the history of the world.

Nobody has ever been as prolific at getting offended as we are.

Nobody cries over insignificant nonsense as loudly and consistently as us.

It’s the one thing we seem to do better than everyone else on the planet. We corner the Offended Market, and it’s not even close. Modern Americans love to get offended more than we love eating Cinnabon or talking about our fitness goals. If it was an Olympic sport, we’d grab the gold, silver, and bronze every year. If it was a job, we’d all be millionaires. In fact, we have turned it into a job, and the people who do it professionally are millionaires (Al Sharpton, etc). It is our calling card, our national pastime. It is the battle we fight and the banner we wave.

Most of all, I find myself positively dazzled by the dexterity and athleticism with which we get offended. We can juggle six or seven outrages all at once, and then drop them and pick up new ones in the blink of an eye.

Our creativity and meticulousness are also quite notable here. We can look at any situation and extract hundreds of offensive factors that an untrained eye probably would have overlooked. We conjure up more fabricated outrages and controversies in a month than past civilizations could have mustered in a thousand years.

Do you remember what everyone was super worked up about four weeks ago? Yeah, me neither. That’s the point. We move on to the new outrage so quickly and the old ones are buried and forgotten. Well, whatever it was way back then, I’m sure it was REALLY bad and we were REALLY upset.

It’s always something. We have located the Fountain of Eternal Indignation, and we drink it by the gallon.

So then it is no wonder that this is the climate which has given rise to a concept called microaggressions.

Have you heard about these? I was thinking about them a lot yesterday after I watched this stirring and important PSA on the subject by Andrew Klavan:

Inspired to do my part in exposing the micro-scourge, I sent out these Tweets:

My wife just asked me to take out the garbage. Is that a microaggression or just a regular aggression?

The cat just got up from the couch as soon as I sat down. When will these microaggressions end?

It was not easy to confront the fact that I’ve been microaggressed upon by both my wife and the cat, but complaining about it on Twitter was deeply therapeutic. Am I a ‘hero’ for fighting these injustices via whining about them on social media? I wouldn’t use that word, but that’s only because I’m so humble.

For anyone who isn’t familiar, a microaggression is something that college students learn about because science and history are too boring. It is, according to Wikipedia, a theory that ‘describes social exchanges in which a member of a dominant culture [or gender] says or does something that belittles and alienates a member of a marginalized group.’

Wait a minute, you might think. Isn’t that just a regular aggression? Don’t we already know that you shouldn’t insult and alienate people? Why do we need a new word for it?

It would be, by any definition, aggressive and belittling for White Guy A to walk up to a Chinese individual and say, “Hey, I hate Chinese people! Go back to China, Chinese person!”

But, as taught by the deranged social theory promoted by nearly every public university in America, a microaggression happens when White Guy B approaches a Chinese person and says, “Hi, where are you from?” or “Hello, I’m interested in your culture. What language do they speak in your country of origin?”

Non-liberals would find those comments to be utterly innocuous, even friendly, but liberals have decided that White Guy B and White Guy A are identical, and their words and actions can be interpreted the same.

A microaggression, in other words, is what happens when someone says something inoffensive but the listener chooses to be offended by it anyway. Microaggressions are closely related to microinequities, which is when minorities, gays, and women are ‘overlooked’ or ‘singled out’ by a ‘gesture’ or a ‘tone of voice’ that manifests a ‘deeply rooted and unconscious’ bias.

The great thing about the ‘unconscious bias’ shtick is that it allows someone to infer offensive meanings in what you say, while preventing you from defending yourself by assuming that you don’t actually know what you mean or how you feel. In the bizarre world of contemporary progressivism, only the Offended Person can tell you how you really feel, even if it isn’t how you feel. Essentially, you feel however the Offended Person feels you feel. Got it?

Still confused? OK, check out this Buzzfeed post, which features a bunch of fashionably somber 20-somethings describing the times when someone microaggressively forgot their last name, complimented their hair, or asked where they’re from. (Some of the examples listed are legitimately rude, which makes them regular old straightforward insults. We don’t need any fancy new progressive buzzwords to figure out how to categorize them.) 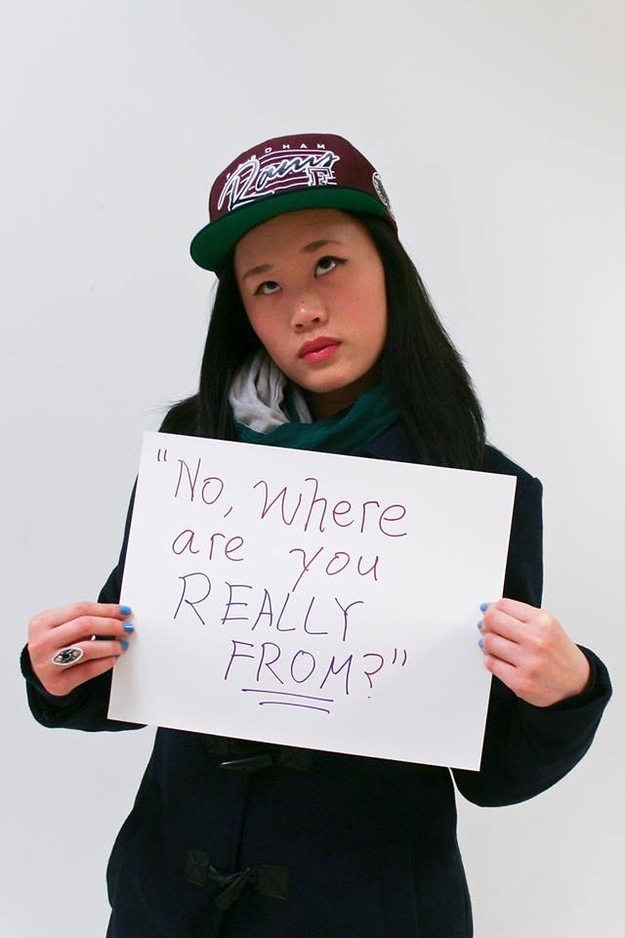 An even more cataclysmic collection of microaggressions can be found at this link, where members of the “LGBT community” tell harrowing tales of being assaulted with pronouns: 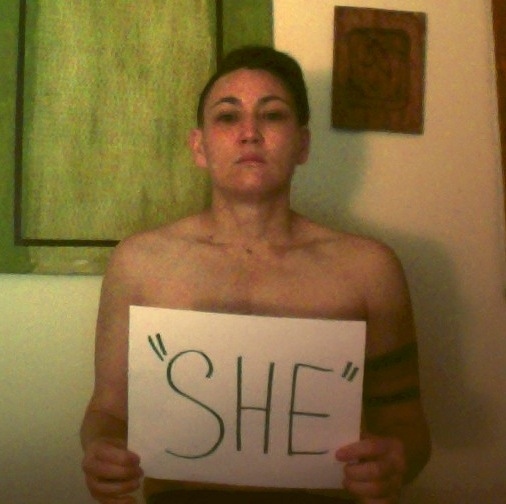 The New York Times explains, in a piece titled Students See Many Slights as Racial ‘Microaggressions,’ that it’s also microaggressive to praise a person for being articulate, or to acknowledge that Asians are often gifted in math, science, and technological fields.

With these in mind, maybe you won’t be too shocked by this example offered by a reader in an email last night:

Love the blog, man. Thanks for it. I’m a sophomore at a college that shall go nameless. I saw your Twitter tirade tonight about micro-aggressions and I thought I’d let you know that my university has launched a “campaign” to make us all aware of our unconscious biases and microaggressions that serve to otherize minority groups…

Today a girl in one of my classes suggested that pulling out a chair or opening a car door for a woman could be a microaggression because it insinuates that she is incapable of doing it herself. Lots of people INCLUDING THE PROFESSOR agreed! I feel like I’m surrounded by crazy people…

Yes, opening a car door is a microaggression.

Does anyone else get the impression that college is somehow making a lot of people dumber (or maybe just accentuating preexisting dumbness)? I pray for this young man, that he make it through three more years of higher education without sustaining any serious brain damage. A tall order, to be sure. I’m not even taking these classes every day and I feel slightly concussed just from reading the phrase “unconscious biases and microaggresions that serve to otherize minority groups,” let alone that whole car door bit.

It’s remarkable that many in our society are so addicted to victimhood that they can’t even wait for the handful of fresh media-constructed outrages to come along in the news every week. They have to stop and snack on these infinitesimal little affronts and indignities along the way.

Everyone wants to be a martyr these days, and they’ll grasp at any straw and sob over any banal remark in order to achieve it. They will twist and torture any comment or polite exchange just to find even the faintest hint of a snub or a taunt.

We are absolutely determined to be victims, and I think there are a few reasons for that:

First, many of us have been programmed to desire pity more than anything — even above respect or love. There are a lot of profound spiritual factors at work here, and it would require a hundred different blog posts to even crack the surface. To sum up this phenomenon in a very insufficient way: our obsession with pity stems from our selfishness. Love, charity, and fraternity, in order to exist, must be both given and received. They are a great gift, but also a duty. When we love we are showered with blessings, but we are likewise called to make enormous sacrifices. Pity, on the other hand, works just one way. When a person demands pity they demand something for nothing. They want to be a recipient but not a giver. This is why love has fallen out of favor in our culture and pity has been put in its place. It’s also why many marriages fall apart. When love is extinguished often its void is filled by a lethal mixture of pity and guilt. I think it can be accurately said that some people in our society have spent their whole lives in relationships ruled only by these two forces.

Second, we have come to believe that our Victimhood grants us wisdom and insight. How many times has a constructive debate been derailed when one of the participants suddenly proclaims that only their opinion counts because they’re the only one who “knows what it feels like”? Important cultural and social issues devolve into gladiatorial duels over who can claim the title of Ultimate Victim. Whoever wins then earns the right to make even the most irrational and unintelligible assertions, and anyone who defies them will be deemed a bigot and banished from the conversation. For this reason, people collect their examples of microaggressions like chips at a casino, and then they cash them in as soon as someone mentions abortion or affirmative action on Facebook.

So that’s the diagnosis, but what’s the cure?

Well, we could start by not sending our kids to public universities. Asinine gibberish like “microaggression” can only be effectively fostered and spread in the cloistered, cutoff, sheltered environment of ‘higher education.’ Maybe if we starve the beast, it will stop infecting our kids with this kind of madness.

But that would be a merely partial solution. The full answer escapes me, but I know it requires everyone to come to terms with these five Absolute Truths:

1) If it wasn’t intended to offend you, then you shouldn’t be offended.

2) You do not get to decide someone else’s intentions. They do.

3) Being offended is a choice you make. Nobody is responsible for that choice but you.

4) Even if the slight was intended and deliberate, functioning adults understand that they must move on and not dwell over every sideways glance or rude comment.

5) You have to stop doing the trendy internet thing where you write something on a piece of paper and take a picture of yourself holding it up while frowning. It’s just annoying at this point.

You’ll never be happy or satisfied if you don’t keep these five points in mind.

But then, for the grievance mongers, I suppose happiness isn’t the goal.

If they’re happy then people might stop feeling sorry for them.

Whatever they do, they certainly can’t allow that to happen.