Satan is a liberal 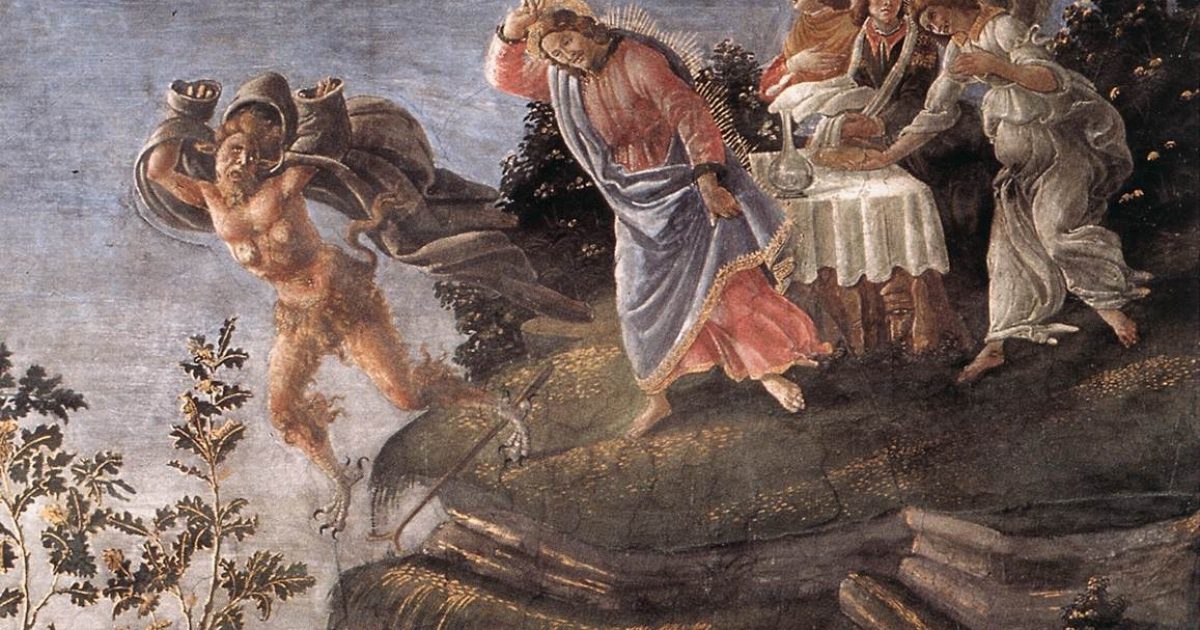 I’ve come across this bizarre claim countless times, and I’ve been meaning to respond to it for a while now. Fortunately, this email from Tim afforded me that opportunity:

You idiot. You are NOT God. You seem to be under the impression that all of your opinions are right. Honestly I have NEVER encountered someone as egotistical and arrogant as you.

You have made it clear that you think all liberals are Satan and we’re all going to hell. I read your recent post where you even claim that people who believe in reproductive rights can’t be Christians at all. That’s what prompted me to write to you and ask if you’ve ever actually read the Bible? I know you are uneducated trailer trash who dropped out of high school so I assume you haven’t done any serious theological research. On the other hand, I have a MASTERS in theological studies at a well known university, and I can tell you this: Jesus was a LIBERAL.

Let’s look at the ACTUAL FACTS. Jesus admonished the Pharisees for praying in public. He would therefore be for separation of church and state and against prayer in school.

Jesus said that the rich will have trouble getting into heaven and told us that we must give to the poor. He spoke out against income inequality.

Jesus was FOR women’s rights. He stood against the archaic anti-woman laws of the time, while conservatives are FOR those laws today.

Jesus was FOR taxes. He said “give to Caesar what is Caesar’s.”

Jesus said we should accept everyone. Conservatives don’t accept people in the LGBT community, women, or immigrants.

Jesus was a tolerant, peaceful man who despised greed and violence. He was a liberal.

If anyone in the Bible was conservative, it was Judas. In fact, I think you two have a lot in common.

I’ll try to address all of your points one at a time. So let’s begin, rapid-fire style, with your first paragraph:

-Wonderful opening sentence. It really sets the stage for a constructive and meaningful dialogue.

-Yes, you caught me. I do think my opinions are right. In fact, if I thought they were wrong, they’d stop being my opinions. By definition, if I am asserting something to be true, I must believe it to be true. From your criticism, it would appear that you have opinions that you present as true even though you don’t think they actually are true. Now, there’s another words for this: lying. Also see: hypocrisy. I wonder, do you think you’re right in your opinion that I think my opinions are right? What about all of the other opinions you shared in this email? Do you believe them to be accurate? If not, why are we having this conversation?

-I don’t think all liberals are Satan. There can only be one Satan. And he’s a liberal.

-How dare you. I didn’t drop out of high school. I dropped out of community college.

Even sittin’ in my trailer, completely lacking any formal education at all, I still know that a discussion of this nature should really begin with a definition of terms. Both the words ‘liberal’ and ‘conservative’ have meant different things at different points in history. At least, I assume that to be the case. I can’t be sure, what with the lack of a libary and Inturhnet access in dis here traylor park.

So, I think we  need to clarify that modern American liberalism, or ‘progressivism,’ is a particular ideology informed by the social, political, religious, and sexual philosophies of guys like Machiavelli, Kant, Nietzsche, Freud, and Marx — the ‘pillars of unbelief,’ as Peter Kreeft calls them. Contemporary Western liberalism — with its defense of abortion, gay ‘marriage,’ relativism, forced wealth redistribution, pornography, massive government, and its attacks on the family, faith, life, and liberty — is truly a unique abomination.

When you claim Jesus as a liberal, you are putting him under the same umbrella as these men. But if The Lord were to come back, call you up into the mountain like Peter, James, and John, and bless you with another scene like the Transfiguration, somehow I doubt that, instead of making Moses and Elijah appear before you, He would summon the souls of Friedrich Nietzsche and Karl Marx.

I will not claim Jesus as a ‘conservative.’ Jesus was, is, and always will be The Lord. Jesus is Jesus. He is much too large to fit inside our paltry little political ideologies. You are the one trying to make Jesus into a disciple of your own modern philosophy. My only intention today is to refute that attempt; not make a similar attempt of my own. I do not think He is a conservative. I think He transcends any label we can place on Him.

Now, onto the meat of your argument, such as it was.

“Jesus admonished the Pharisees for praying in public. He would therefore be for separation of church and state and against prayer in school.”

Jesus admonished the Pharisees for being hypocrites. It wasn’t prayer he opposed, it was the fact that they did not believe their own words. In those days, the elites were all religious, so a show of religiosity could be an attempt to elevate one’s self. This is what Jesus railed against.

Times have changed. The elites are no longer religious, and appearing religious will no longer assure you admiration and adulation. Quite the opposite, in fact. The oligarchy in our day consists of godless progressive politicians, media figures, corporate executives, and Hollywood celebrities. In these circles, being overtly Christian will get you shunned, not applauded.

It’s absurd to claim that Jesus was against all public prayer. He prayed in public Himself. He prayed to God while He died on the cross, He prayed at the Last Supper, He brought His apostles with Him when He prayed in the Garden of Gethsemane.

More importantly, He instructed his disciples to go around telling everyone about their faith.

“Go into all the world and preach the gospel to all creation.” Mark 16:15

This isn’t just a thing He said; it’s the whole point. If you keep your faith private, you are defying Christ’s command. You are hoarding the Good News inside yourself, and denying it to others. You are a traitor and a coward.

The modern day Pharisees are liberal. These were men who invented their own rules, which is the very definition of relativism. They also made a great show of believing in the popular sentiments of the day. Back then, the popular sentiments were religious. Now, they are ideas and words like ‘gay rights,’ ‘tolerance,’ ‘diversity,’ ‘abortion rights,’ etc.

The Pharisees even dressed in ceremonial garbs to advertise their superior value system. Of course, nobody wears ceremonial robes anymore, but they do put equal signs in their Facebook profile to let the world know that they’re totally on board with the fashionable cause of the day.

You are the Pharisee, Tim. You and your ilk.

“Jesus said that the rich will have trouble getting into heaven and told us that we must give to the poor. He spoke out against income inequality.”

You’re right. He did say these things. Good point. You just forgot to include the part where you even attempt to explain how ‘giving to the poor’ is a specifically Liberal act.

A lot of research points to Liberals giving far less to charity than Conservatives. But even by Liberal estimates, Liberals, at best, dedicate an equal-to-slightly-smaller amount of time and money to charitable endeavors.

Either way, there is absolutely zero justification for the notion that only a Liberal wants to help the poor. Even with this little blog I’ve raised close to 30 thousand dollars from my mostly conservative readers to build wells in Guatemala and provide mosquito nets in Uganda.

Jesus said to give to the poor. He didn’t, however, advocate for forced wealth redistribution. In Matthew 19:21 He told us to “go sell what you possess and give to the poor,” He didn’t say, “go ask your government to take what your neighbor possesses and give it to you.”

Your problem, Tim, is that you don’t look at these things deeply enough. You see that Jesus wanted us to give to the poor, but you never ask why He made these demands. Did he simply want to provide a practical solution to people who don’t have enough food and clothing? That might be part of it, but it’s not the point.

Paradoxically, He told us to give to the poor, but He also said the poor are blessed, and called us to be poor ourselves. So if ending poverty is the goal, why is Jesus trying to create more of it?

The answer, Tim, is love.

The act, the choice, of giving is an act of love. We are to give to the poor because we are to love the poor. Why did Jesus herald the woman who gave only two pennies at the temple? Her two pennies will accomplish nothing of practical consequence. But they represented an immense amount of love, and so they were more valuable than the bags of gold a wealthier man might contribute.

Forced wealth redistribution is not Biblical because it is not an act of giving. It is a systematic, detached, bureaucratic machine, and it treats everyone like we are nothing more than percentage points and income brackets. There is no love in it. And if there is no love, there is no point.

Jesus was not a Socialist, because Jesus called us to choose love, not apathetically sit back and rely on the government machine to do the things that we can already do ourselves.

“Jesus was FOR women’s rights. He stood against the archaic anti-woman laws of the time, while conservatives are FOR those laws today.”

Conservatives are for stoning women to death for adultery?

Even if they are, which seems like a bit of a dubious claim, you still haven’t explained why or how Liberals not only stand for women’s rights, but actually monopolize the position.

Since you haven’t explained your argument at all, I can only assume that ‘anti-woman,’ in your mind, means pro-life. This is a fascinating point of view, particularly because women are usually pro-life.

What you’ve just done is declare that millions of women are anti-woman because they don’t agree with your position. That makes you, perhaps, the most misogynistic person I’ve come across (at least, since the last time I came across a pro-choice male).

Facebook Twitter Reddit Pinterest
Pages: 1 2
PREVIOUS COLUMN
This person is planning to kill me in order to teach me that I shouldn’t be mean and hateful
NEXT COLUMN
Dear single dudes: it’s time to man up