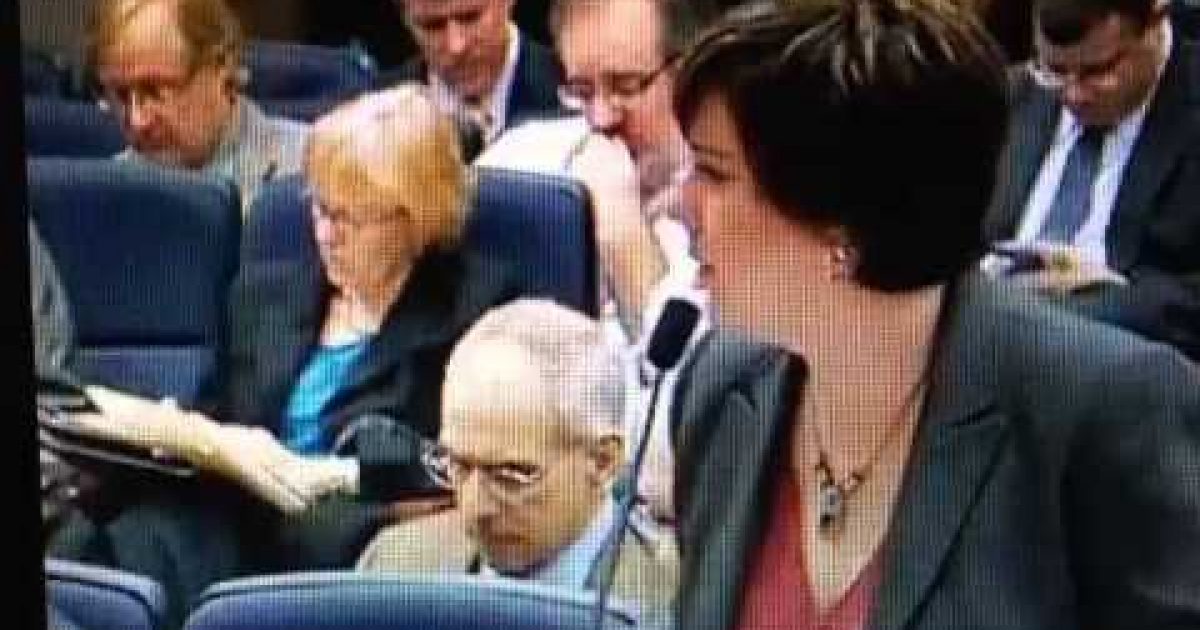 That’s a quote from Norma McCorvey, AKA Jane Roe, the woman whose Supreme Court case resulted in the legalization of abortion in the United States.

So is it any wonder that America’s new Abortion Mascot, Wendy Davis, has turned out to be — get ready for this — a liar?

When politicians lie, we will often very politely refer to it as a “mischaracterization” or a “misrepresentation” or a “misstatement,” but I think “lie” is a much simpler way of putting it. Wendy Davis isn’t a micharacterizer; she’s a liar. What else could we expect? The woman catapulted herself to national stardom by delivering an epic pro-abortion screed for over ten hours. She used late term abortion as the fuel to rocket herself into the spotlight. She delivered her Death Manifesto — her Mein Kampf — and it made her a mainstream sensation. Lies? Evil cannot be communicated in any other way.

She painted a picture of herself as a woman who’d overcome great obstacles to eventually achieve the distinction of being the 90 millionth liberal feminist to exploit the death of children for her own personal gain. You know, just your classic American Success Story.

Unfortunately, some of the facts here are “blurry.”  She claimed to be a divorced teen mother who lived in a trailer and eventually paid her way through college.

In reality, she was never a divorced teen mother. She divorced at 21, lived in a trailer for only a few months, moved to an apartment, and eventually married a lawyer. Her second husband paid for her last two years at college and for her time in law school. Here’s a fun morsel she seems to have omitted from her autobiography: she divorced him the day after he made the final school payment. The initial divorce filings cite Wendy’s adultery as one of the reasons for the split. The courts awarded custody of her two daughters to her husband. She then ran for Fort Worth city council.

Finally, after such a harrowing journey, she stood up in pink tennis shoes and spent half a day explaining why babies should still be executed after 20 weeks.

Davis, of course, deflected criticisms over her lies and omissions, saying, “my story is the story of millions of Texas women.”

Wendy Davis’ story is the story of millions of Texas women? Really? I certainly hope not.

Millions of Texas women get their law degrees paid for by their rich lawyer husbands, who they then divorce before becoming an extremist shill for Planned Parenthood? Millions? For God’s sake, what has Texas become? New York?

In some ways, though, Wendy’s tale is very much par-for-the-course. It isn’t the story of Texas women, but it is the story of the abortion business. They both lie to get what they want. They both paint false narratives because the real narrative isn’t quite so palatable.

Take Planned Parenthood, for example. Planned Parenthood lies as a matter of policy. If you put a Planned Parenthood executive in a lie detector, the thing would probably explode. In fact, it would be much easier to list the few times a PP official has told the truth about something. That list would likely begin with the PP lobbyist who openly endorsed infanticide during a Florida legislative committee hearing, saying the decision to kill a baby who survives an abortion should be left to the doctor and the “patient.” Patient, in this case, refers not to the dying baby, but the mother.

(Side note: Planned Parenthood responded to the controversy this sparked by dismissing the whole discussion as “speculation about a vague set of extremely unlikely and highly unusual medical circumstances.” Do you notice the irony? Pro-abortion advocates often attempt to corner pro-lifers by bringing up “life of the mother” scenarios, where an abortion would be required to save a woman from certain death. THAT is “speculation” about “unlikely and unusual medical circumstances.” The pro-aborts are the ones who argue abortion almost exclusively by tossing around the hard and rare cases. The hypocrisy never ends with these people.)

Honesty from Planned Parenthood is like a New York Jets Super Bowl appearance — it only happens once every 50 or 60 years. That’s why we’d have to go back to the mid-20th century for another example: A 1950’s Planned Parenthood brochure admitted, in an attempt to differentiate the procedure from other birth control methods, that abortion “kills the life of a baby.”

Well, on that we agree, Planned Parenthood.

And that’s it. That’s all I have in the “truthful” column.

We could talk about their reckless protests against laws that would merely require them to offer an ultrasound to a woman before performing an abortion. These are rules that would only hold Planned Parenthood to the exact same standards already imposed on every other part of the medical field.

We could talk about the case in Illinois where they built the largest abortion mill in the nation, under false pretenses.

We could talk about the undercover video that shows a Planned Parenthood manager advising a pimp on how to best procure “services” for his underage prostitutes.

We could talk about Planned Parenthood’s claim that Kermit Gosnell was a rogue outlier; an aberration who only existed because pro-life activists forced desperate women to seek out his services. We could dismantle that notion by pointing to the Planned Parenthood facility in Delaware that was put under investigation after two nurses resigned, citing “ridiculously unsafe” conditions and “a meat market style of assembly line abortions.” In the span of a few months, five women were sent to the hospital as a result of botched abortions at the clinic. Meanwhile, there’s the kindergarten teacher who was killed by an abortion performed by Dr. Carhart in Maryland. In the same state, two other abortionists had their licenses suspended for killing another woman through a bungled abortion. Also last year, a woman at a Planned Parenthood clinic in Austin became the eighth patient to require emergency medical attention after an abortion at the facility. In Austin in the same year, three former workers at Aaron Women’s Clinic in Houston went public with evidence of horrific illegal abortions and infanticide by Dr. Douglas Karpen.

Read about many more cases, all similar to Gosnell, here.

We could talk about Planned Parenthood’s habit of not reporting rape to authorities. A habit that got them into significant trouble in Louisiana, where the Louisiana Department of Health and Hospitals cited three different clinics for failure to report child rape. At least one of the guilty establishments has since closed down, which will tragically hinder some women’s ability to be severely injured in an unsafe procedure conducted by quacks who only got into the abortion business because they couldn’t hack it in real medicine.

We could talk about these things, and so much more, but I’m already pushing 1300 words and I haven’t even gotten to the point. So here it is:

Out of all the lies that stream like rivers of blood and sewage from corporate Planned Parenthood, the worst, most brazen, most obvious, and most influential has been this one: “Only three percent of Planned Parenthood’s services are abortion.”

You’ve heard that one a time or two, haven’t you? I bet, regardless of how thoroughly I debunk such silliness right now, several people will still reiterate the statistic in the comments below. That’s because the line is just that — a line. It’s something they say, and it gives abortion proponents something to repeat. They put it on the music sheet and their chorus sings right along. How many of them have taken the time to verify the claim? Not many. Probably less than three percent.

Planned Parenthood arrives at the “three percent” figure by employing a little bit of blatant misdirection. First, they “unbundle” their services. This means that a woman can go in and get an STD test, a pregnancy test, and some birth control, and Planned Parenthood will count this as three “services” performed. Next, they give all of their services the same weight. So if a young lady gets an abortion and then, on the way out the door, grabs a free condom, Planned Parenthood will say that she received two services, granting equal status to both. This would be like a car dealership selling 7 vehicles, as well as 7 sodas from the vending machine out front, and vaguely chalking it all up to “14 items sold” for the day. Then imagine them stating that selling cars only accounts for “50 percent” of their business, while the other half constitutes Diet Coke distribution.

The next step in the “3 percent” deception is just plain ol’ pants-on-fire-lyin’. Planned Parenthood brings in about a billion dollars a year. Half of that is from taxpayers, leaving around 500 million non-tax revenue. From that half, they make at least 150 million dollars a year by aborting around 330 thousand babies. That means abortions account for about 1/3 of their revenue, aside from the money given to them by Daddy Government. Abortions aren’t anywhere close to 3 percent of their business. Only in Abortion Candy Land (the worst board game concept ever) could you get away with saying that a third of your revenue amounts to 3 percent of your business.

When someone says “abortion is only 3 percent of Planned Parenthood’s business,” what they’re actually saying is, well, nothing. That statement has no meaning and no basis in reality. If you were a business manager for a private company and you used the same sort of math, you’d be fired within hours. Unless you’re a business manager for Planned Parenthood, in which case you’ll be the national director by next month.

So, Wendy Davis lied? Yes, of course she did. She lied about a lot more than her divorce and her stint in a trailer park. She lied the moment she stood up and positioned herself as a champion for women. In reality, she isn’t championing anyone but herself, and she’s stepping on the carcasses of dead infants in the process.

Planned Parenthood has been doing that for decades.

Wendy Davis, you learned from the best.