Quick! Someone raise the minimum wage before this man starves to death! 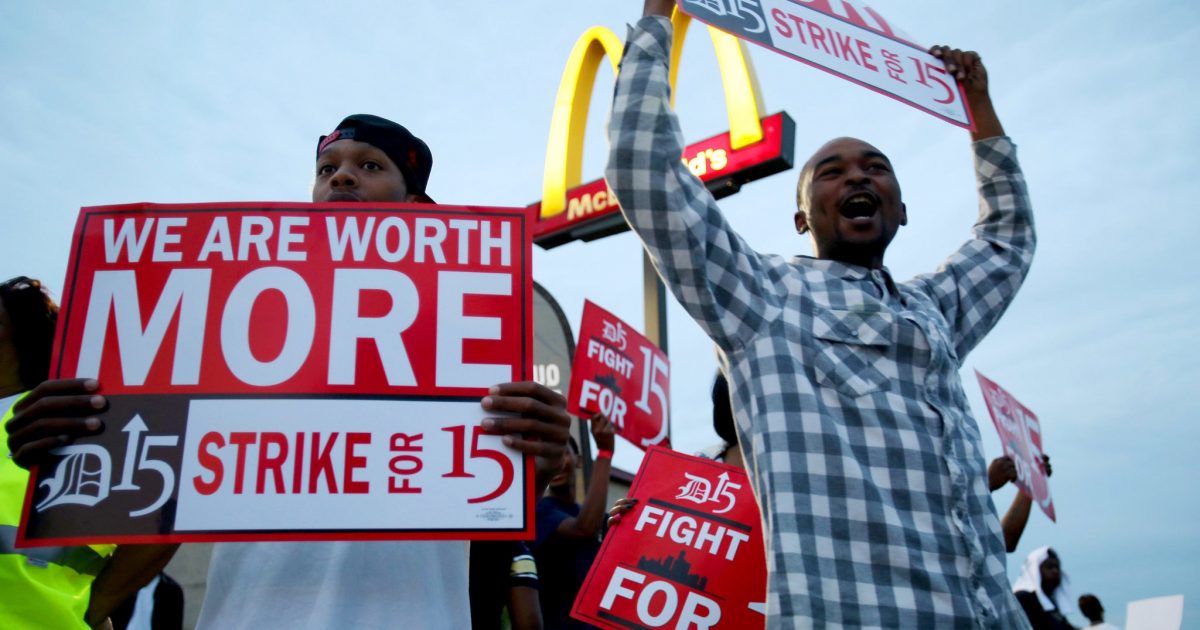 Someone alert Feed the Children. Jeff, who messaged me this week, is fighting to survive:

Matt Walsh…. I first started following you when I read your post defending customer service representatives. You also wrote something blasting people who don’t tip, and then last week you wrote criticizing customers who talk on their phones while they’re in the check out aisle. I’m in a the customer service industry so I greatly appreciated these writings. I read them and thought, hey, this guy is on our side. But then last week I saw you Tweet a sarcastic slam against people fighting for a higher minimum wage.

I went back to see what else you’d said on the subject and discovered a lot of ignorance and hate directed at low wage workers. I realized you’re just a fraud and a liar. You pretend to fight for working class people and to be a “voice of the people” and all that bull sh*t, but then you have a problem with giving us a living wage. I know you’ve never been in our shoes as a big shot wannabe famous blogger, but let me tell you what it’s like to try and live on the poverty level minimum wage. I graduated college a year ago. There were NO JOBS to be found (which you’d know if you had a real job in the first place). Eventually I ended up at a fast food place making minimum wage.

I want to start a family, get married, have kids, buy a home, buy a more reliable car, do all the things people in America should be able to do. But I can’t. I can barely to pay my bills as it is. I’m stuck and I’m struggling. The movement to raise the minimum wage to 15 dollars an hour would at least allow me to move into my own place and start a life.

One day maybe I can make money sitting around typing hateful sh*t all day and basically being an assh*le for a living, but right now I don’t have that luxury like you. That’s why I need the minimum wage to be something I can at least survive on. That’s what ALL Americans deserve. If there’s ever a strike or rally in my town, I’ll be there. I’ll be there because of people like you. Or maybe you’d prefer it if all the people serving you food and waiting on you hand and foot just went home and starved to death. I guess that’s what it means to be Christian, right Matt?

Yes, I’ve certainly only ever lived in luxury. I used to go to sleep in my one bedroom apartment and smile about my privileged existence while I listened to the drug addicts down stairs yell at each other until 3 AM. Sometimes I’d even laugh with radiant joy about my stress-free life, as I cooked some Ramen Noodles while watching the roaches crawl across the counter.

And, when I couldn’t afford to pay the cable, or to turn on the heat or the air conditioning, and when I spent weeks at a time eating nothing but gas station hot dogs and peanut butter sandwiches, and when I worked two or three jobs at once, never had any vacations, rarely had a weekend off, and when I paid for gas with quarters, and started selling my few possessions on Craiglist so that I could afford rent for the month, and when sat alone at nights in my rundown pad staring at the wall in silence, I used to thank God that I didn’t have as hard a life as you, Jeff.

Now, here’s the funny thing: even then, I didn’t whine, and I never waved my arms around and screamed about how I was on the verge of starvation.

I mean, really. For goodness sake, man, get a grip.

Is that a common workplace hazard over at McDonalds? Are you finding that your co-workers often collapse on the floor and whither away from malnutrition?

“Hey, where’s Steve today? He didn’t show up for his shift.”

“Oh, Steve starved to death last night. He’ll be out for a while.”

Is that a conversation that often takes place in your break room?

It is beyond embarrassing that we live in a country where someone would spend tens of thousands of dollars on a college education, and then move back in with his parents and complain that he is in a fight for his very survival.

No, Jeff, your survival is not at stake. Sure, one day you’ll die, but I can guarantee that ‘minimum wage’ won’t make it on the autopsy report under ’cause of death.’

As far as I can tell, you have two options:

1) Continue to use your time surfing the Internet, and writing angry emails to bloggers, and organizing minimum wage protests, and sobbing about your tragic lot in life. Sit in idle and wait for the government to come along, lift you on its shoulders, and carry you into a paradise of mediocrity. Hope that the law will magically make it possible for entry level burger flippers to afford homes, and cars, and other things that most of us had to actually earn.

2) Get over yourself. Stop complaining. Stop treading water and start swimming. Decide what you want out of life and go chase it. Make sacrifices. Take risks. Move out of town for a new opportunity, or out of state, or out of the hemisphere, if that’s what’s necessary. Realize that there are other jobs out there, but you have to be willing to do them, and first you have to be willing to pursue them. Stop insisting that there are ‘no jobs,’ and pay attention to all of the people somehow finding these openings that you claim don’t exist anywhere in the known galaxy. Stop seeing yourself as entitled to the American Dream just because you bought a fancy college education, and have now spent one measly year in the job market. Stop belittling other people’s accomplishments, especially when you haven’t yet accomplished much yourself. Stop looking for sympathy. Start looking for a path up the mountain — however treacherous, however dangerous, however hard — and get to climbing.

Those are your choices, friend.

As usual, one is easy, but the other is right.

Jeff, I think you should also know that you’re begging for your own firing when you talk about a 15 dollar minimum wage. You aren’t making 15 bucks an hour pushing buttons and frying potatoes because your labor isn’t worth that kind of money. You’re doing something that most people could do, which means your employer doesn’t have to shell out big bucks to attract highly skilled candidates to do it. If they were forced to shell out big bucks, they’d either become much more discerning about who they employ, or they’d simply cut to the chase and automate your entire profession.

See, in the mean world of reality, we are forced to confront the fact that when the government comes in with its Hammer of Economic Justice and starts bludgeoning business owners over the head, demanding that all of their lowest skilled workers be given an across-the-board raise, there are real trade-offs that must occur. Even the Congressional Budget Office predicts that half a million jobs will be lost if the federal minimum wage is raised to $10.10.

If you care to pay a few dollars to purchase this 180 page study, you’ll find that two leading researchers conducted a thorough investigation and discovered that the vast majority of the most reliable empirical evidence points to a direct causal link between job loss and minimum wage hikes.

Of course, your fellow minimum wage proponents are quick to assert that “most of the studies” somehow “prove” otherwise. Next, they’ll probably tell you about a 1994 study out of New Jersey that actually revealed an INCREASE in employment as a result of a minimum wage hike. What they won’t tell you is that these psychotic claims have been thoroughly debunked.

But this is all academic. It doesn’t matter to you.

Put it aside, and go do something with your life.

Albert Einstein was a moderately gifted dude, but if he rose from the grave, knocked on my door, and asked for a job washing my windows, I’d still only pay him the going rate for residential window washers. Einstein was valuable when he was doing that thing which only Einstein could do (unlocking secrets of the universe, styling his hair to give it that ‘just electrocuted’ look, etc.) but he’d be equally as cheap and expendable as the next guy when doing things that anyone could do.

Jeff, even though you hurt my feeling and said mean things about me, I still want you to succeed in life. I want you to find that spot where you can blossom. I want you to be The Einstein of something.

But, until then, I regret to inform you that you are being paid exactly what you deserve.

Facebook Twitter Reddit Pinterest
PREVIOUS COLUMN
The problem with voter ID laws is that they don’t make it hard enough to vote
NEXT COLUMN
Veterans are dying, but at least this criminal still gets his sex change