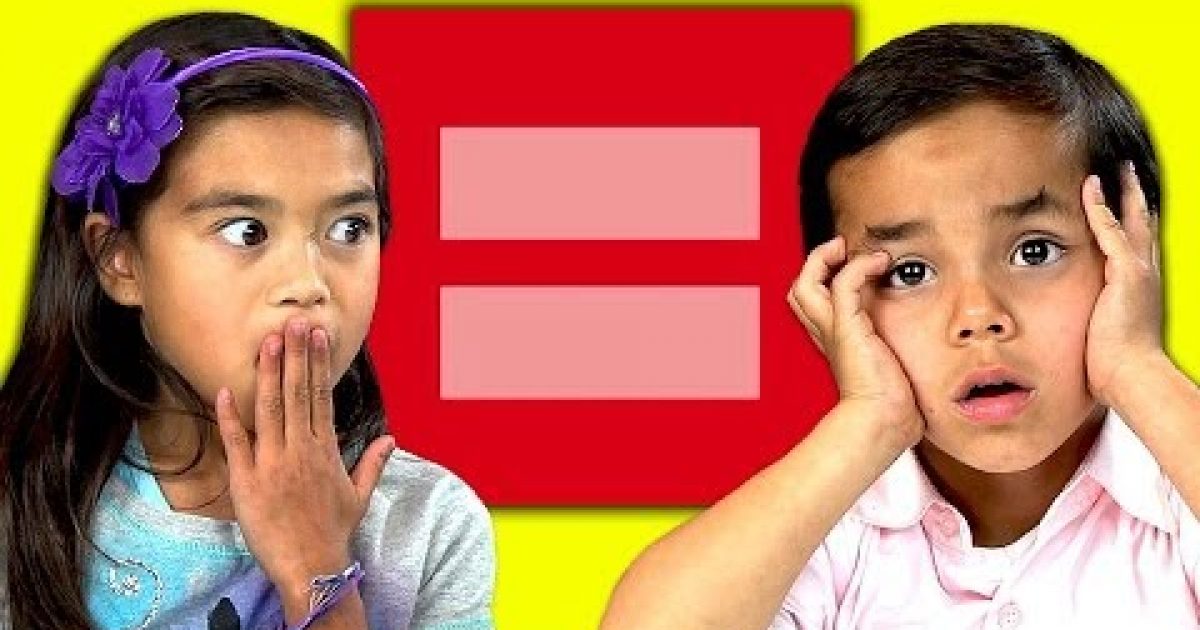 A bunch of readers have sent me this video. It’s a piece of viral propaganda put together by a gay rights group. You can check it out yourself or I can summarize it for you:

Several children, aged 5 to 13, are asked to watch footage of a couple of gay wedding proposals. The “heartwarming” video catches the reactions of these children; reactions that sway between awe and adorable bemusement. After viewing the tape of the gay proposals, the young kids then offer their own reflections on the issue of homosexual marriage, as they wonder aloud why the big bad right wing meanies would try to stop people from loving each other.

The YouTube video is meant to show how innocent young minds naturally see the truth and goodness of gay marriage — that is, until Republicans and Christians pollute their little souls; turning them into hatemongers who buy into the vicious lie that “marriage” is an institution specifically designed for the unique procreative union of a man and a woman.

As the makers of the video note: “The opinions of children about these issues can give incredibly valuable insight…”

I read that and I couldn’t help but wonder: “these issues”? What are ‘these’ issues? What other hot button social controversies could be enlightened and illuminated by the raw honesty of children? We know that progressives are quite fond of using kids to make a point. President Obama has even gone so far as to argue for his side of the gun control debate by reading letters written in Crayon by naïve second graders.

Personally, I find this all to be quite manipulative, absurd, unethical, pointless and distracting. These are moral and intellectual discussions that are both complex and nuanced. I love children but I’m not sure they possess the mental maturity and wisdom to contribute anything valuable to the conversation. Yes, the little ones can be very insightful in their own way, but they probably haven’t examined these controversies with the seriousness and focus the issues require and deserve.

Listen, progressives, we aren’t living in a Nickelodeon afternoon special. This is the real world and these are important matters which call for the input of competent adults. Drop the Legos, put your big boy pants on, and let’s deliberate like grown men and women.

Or not. If you don’t like that proposal, how about this one: employ your “the opinions of children can give valuable insight” strategy equally to every issue. For all of the topics that prompt progressives to trot out a gaggle of giggly juveniles, there is one, and so far as I can tell, only one subject that causes left wingers to hurriedly shuffle their kid-props back onto the buss to get them as far away from the issue as possible: abortion.

President Obama doesn’t read letters from kids when he’s giving speeches at Planned Parenthood fundraisers. Democrat politicians don’t exhort us to “do it for the children!” when trying to pass legislation to protect the abortion industry from regulation. Shockingly, none will surround themselves on stage with culturally diverse elementary schoolers when delivering fiery remarks about the beauty of infanticide-on-demand.

What happened? I thought the opinions of children can give valuable insight? How do you think a 7 year old will feel about the practice of crushing an unborn baby’s skull and throwing his corpse into a hazardous waste container out back?

Wait, you wouldn’t want to tell him about that?

What are you ashamed of?

Abortion is all about sexual freedom, isn’t it?

Where’s the “Kids React to Abortion” video? When will a left wing advocacy group produce that? Are you hesitant because you think it might hurt your cause to show children screaming in horror as a baby is mangled and slaughtered in the name of “reproductive rights”? Do you think it might not help your case to offer up footage of cute little kids having their souls crushed by the tormenting images of the death and violence you endorse and celebrate?

But let’s be consistent.

At the very least, progressives, have you explained your abortion stance to your own children? That’s a serious question. How do you explain your “pro-choice” position to your own kids? How much effort and time does it take to strip them of their rational and instinctive opinion that the baby in mommy’s tummy ought to be legally protected from murder?

I hesitate to say any of this because I wouldn’t want to encourage you to turn your kids into “pro-choicers.” I weep when I think of what you people do to your children when you infect their minds with the insane cannibalistic darkness of your own heinous, godless, hateful ideology. It enrages me to think of you staring at your son or daughter and thinking, “child, you were disposable at one point in your existence.” Or does your cowardice stop you from connecting those dots? Do you suppose that every other child is a piece of trash while still in utero, but yours was a magical aberration — an actual person from its first moment of existence? I’m not sure what’s worse.

In any case, I encourage you to consider what it would be like if you tried to explain your “reproductive rights” stance to your pure, beautiful, innocent 5 year old. If you were to be honest with him, and open yourself up to his adorable and “valuable insight,” as the gay rights video put it, I imagine the conversation going this way:

Son: “Mommy, look, that woman has a bump in her tummy. She’s having a baby!”

You: “Oh, no, son. She doesn’t have a baby in there. It’s just a clump of tissue and cells. She could keep it, throw it away, destroy it — that’s totally up to her.”

Son: “So could you have thrown me away when I was in your tummy?”

You: “Absolutely, honey! You weren’t a real person until you actually were physically outside of my body. Until then, I could have taken you to the doctor to have your brains removed from your skull! Oh, don’t cry. What’s wrong? No, it’s OK. I didn’t. I chose not to have you obliterated. But I could have, that’s all Mommy is trying to say. You weren’t valuable when you were inside me. That’s all. You were nothing. You were meaningless. But now you’re super special, son! Let’s go on a picnic and forget all about this!”

You: “Well because you were just a fetus.”

You: “A fetus is a baby while it’s still inside its mother. Actually, technically, fetus means ‘offspring.'”

You: “Well, no. I mean, yes, but not really. It’s, like, a baby in the sense that it is, of course, of the human species and it does exist, and it is something, but it also isn’t a baby because it isn’t born.”

Son: “So why isn’t it valuable and important?”

You:“Because it depends totally on its mother.”

Son: “So we can throw things away if they depend on us?”

You: “Yes! You understand now!”

You: “Well, no. No, but that’s different. I mean, yes, I could have at one point. Look, it’s complicated. The most important thing to understand is that there was a time in the existence of YOU that YOU were nothing but a worthless parasite. All pregnant mommies are infected with worthless parasites. And they only become not-parasites when they’re born, or at 20 weeks, or 24, or 32, or whenever the mom decides. Why are you crying again? No, son, why don’t you understand that we shouldn’t cry for the million fetuses a year that are terminated? This is all necessary for the sake of consequence-free sex! Huh? Yeah, a million. Now you’re crying even more? Come on, son, don’t be such a Republican about this. You know what? Why don’t we take a trip to the abortion clinic tomorrow and I’ll get you some pamphlets and brochures to read!

OK. On second thought, don’t explain it to them.

Keep all of this toxic filth firmly contained in your own mind.

But remember that you’re ashamed and afraid to tell your child how you feel about abortion. I’m not ashamed or afraid to explain my position on anything to anyone, least of all my own kids. Why is that?