Just pretend this dead lion is a human baby, and then you won’t be so upset 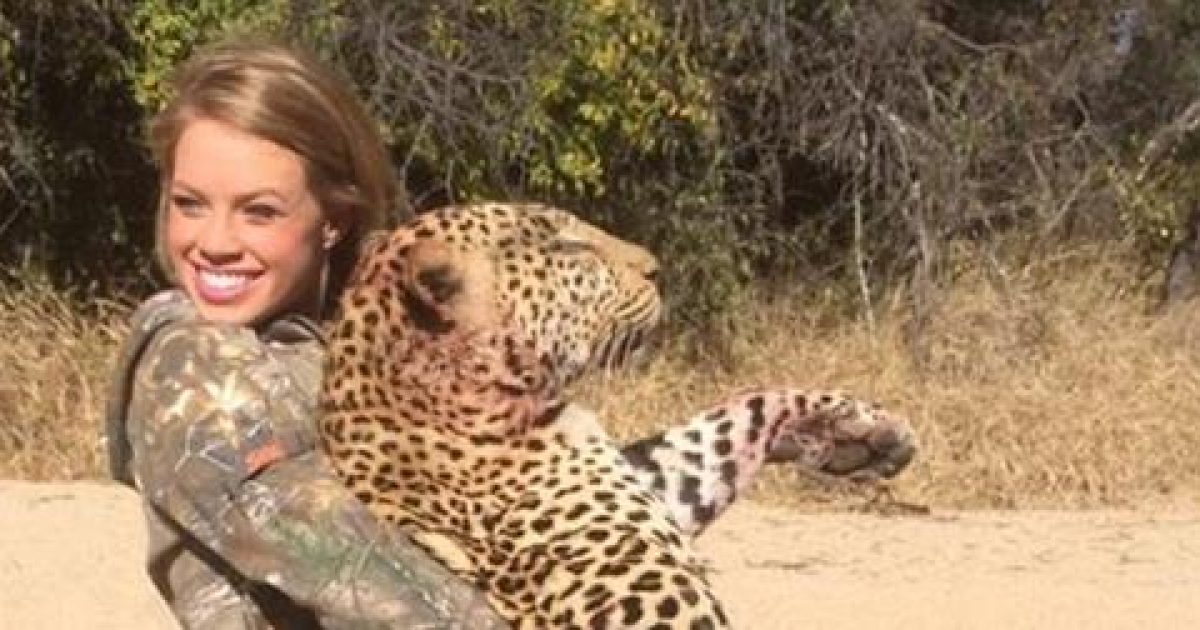 Behold, the face of evil:

I’m sure you’ve seen this young woman’s photos plastered all over Facebook.

Her name is Kendall Jones. She’s a cheerleader, hunter, and, according to the internet, a vile scumbag who deserves to die a slow and painful death.

You see, Ms. Jones goes on trips to Africa where she hunts big game, like elephants and lions. Sometimes she tranquilizes them for the sake of scientific research, or to treat injuries on the animal , and sometimes she kills them. Kendall defends herself by saying that the hunts serve two purposes: 1) feeding hungry villagers, and 2) conservation.

I also think they make for some pretty cool Facebook photos, but that’s just me. At least, I prefer these over the pornographic garbage that clutters half of my newsfeed on a daily basis.

It’s funny that, of all the filth and depravity online, it takes an image of a dead zebra to really rile people up.

Even more peculiar: a million babies are killed every year in this country, yet that has never sparked this level of popular outrage. There are petitions circulating to have Kendall banned from both Facebook and the entire continent of Africa. The condemnation is near-universal, and the anger directed at her is unlike anything I’ve seen in a very long time.

Herein lies my struggle, America. This is why I’m such a cynic. I just can’t take your outrage seriously. We’re surrounded by death and evil, but we don’t complain until someone shoots a cheetah? That seems a bit arbitrary, if you ask me.

Many of the liberal blogs having a meltdown over Kendall Jones are the same ones that spent a week hailing Emily Letts, who filmed her own abortion. ‘What kind of monster smiles after killing something?’ they say about the woman posing with a tranquilized rhino, but not about the woman giggling while an abortionist executes her baby.

The whole dynamic is just deranged. Has the world ever known a culture as delusional as ours? Has a society ever been so confused?  I’m no anthropologist, but I have a hard time believing that any previous civilization could have developed such a perverse mix of hedonism and puritanism.  We’re told we shouldn’t bat an eye when a network sitcom centers an entire episode around teenage gay sex, but at the same time, we should be thin skinned and innocent to the point where news channels have to deliver disclaimers before airing the word ‘redskins.’

It’s utterly bizarre. If I was a space alien I’d be so completely confounded by it all that I’d probably cancel my plans to enslave the human race, thinking that something in Earth’s water supply must be driving its lifeforms insane.

Because that’s what this is: insanity. It’s not even that our morality is inverted or reversed — even that would be too logical. What we are experiencing is nothing short of moral anarchy. Now that we’ve made a mockery of virtue and a religion of death, we are left with nothing to be truly outraged about. So we become the violent answer to the man who gets home and releases his pent up anger by kicking his dog; we get home and release our pent up righteous indignation by killing the man who kicked his dog.

Personally, I don’t care about Kendall’s hobby either way. I don’t hunt myself, but I’m not opposed to it. I probably wouldn’t shoot a lion (except in self defense, should that occasion ever arise), but her actions are legal and helpful to both the townspeople she feeds and the local economy she stimulates. She says she doesn’t kill young animals or mothers with babies, and she claims that her actions help preserve the balance in the African wildlife population.

Fine. I don’t know enough about the issue to call her bluff or verify her claims. Yes, she could be full of it, for all I know. I’m sure she’s not the devil incarnate, and I’m sure she’s doing more productive things with her free time than 90 percent of her college peers, but that doesn’t mean she’s right. And if you’re pro-life — as in pro-human life — and you also oppose Kendall Jones, but you spend much more time protesting the mass killing of babies than you do the hunting of African mammals, then I respect your opinion and your consistency. Carry on. Godspeed.

I suspect, however, that only a very small percentage of the anti-Kendall Jones mob falls into this category.

The rest, by any reasonable estimation, are either in favor of, or largely indifferent to, the murder of babies. They see the killing of ‘endangered species’ as the greatest act of evil, second only to verbally opposing gay marriage, and perhaps now third to calling an overbearing female “bossy.”

It’s not that they value animal life over human life, necessarily. They are humans themselves, and I’m sure, given the choice, they’d gladly choose their own existence over even the most endangered of sea turtles. They also generally recognize the Holocaust or 9-11 to be tragedies far more serious than a wildfire that wipes out half of a forest’s native squirrel population.

They might pretend to be in touch with nature, but most of them aren’t quite keeping it real like this:

I’m not saying that they don’t sincerely love animals, I’m just saying that it’s easier to love animals. It’s easy to be pro-animal rights, which is why so many people are. It’s difficult to stand for human life. That’s really the only rhyme or reason to what is rejected and embraced in our culture. We take the easy route.  No matter what. Convenience is the key — convenient values, convenient virtues.

I can sit here all day and write poems about the beloved walrus or the hallowed dolphin, but my pro-animal stance will likely never require anything of me. I don’t have to do anything. I’ll never be forced to sacrifice for the spotted owl or the gray wolf. A humpback whale will never show up at my door and ask me to take care of it for the next 18 years. A Siberian tiger probably won’t come to my house one day and demand that I change my entire life to accommodate it. I might go out and adopt a pet, but that is always a deliberate act. Babies, on the other hand, happen when we have sex. But sex is fun, and babies are hard work. Babies intrude on our fun. They ruin it. This, and only this, is the reason why we defend the slaughter of children while weeping over the remains of a murdered leopard.

The leopard never caused us any trouble, but the babies were downright cumbersome. Indeed, we value human life, just not human life that needs to be protected and preserved at any great cost to our comfortable lifestyle.

As a eugenic society, we teeter always on the edge of psychopathy. Our acceptance of infanticide eats away at us, under the surface, inside our souls. We fear the loss of our own humanity, so we lash out every once in a while, and pour out all of our tempered moral outrage onto someone — anyone — who can give us a nice, safe outlet. Whether it’s a hunter, or a supposedly ‘homophobic’ reality TV star, or an actually racist NBA owner, we unload our vast reserves of righteous fury, reveling in the opportunity to prove to the world and to ourselves that we still have standards. We still care. We still feel.

It’s all a charade, of course. And the Indignity DuJour will soon be replaced by something else, as we flutter quickly from one puffed up atrocity to the other, never stopping long enough to ask any serious questions about it. Never letting the noise die down quietly enough to have a real conversation about anything.

I wish for once that we would stop, just for a moment, and contemplate a few things.

We are very sad that a woman killed a lion — why?

Because the lion is endangered?

Because it’s ‘majestic’ and ‘beautiful’?

OK, why does that matter? There are other beautiful things, there are other animals. We do we need these? Who cares if they are exterminated from the face of the Earth?

And why do we instinctively place some organisms over others? Why aren’t you upset when I kill cockroaches, but you would be if I killed a bald eagle?

What is life, anyway? Why does it matter? What makes it valuable? What makes some life more valuable? Why is your neighbor more significant than the tree in his front yard?

If you answer these questions, you can only come to one of two conclusions: it’s all meaningless and nothing matters, or life is inherently sacred, especially human life.

Confront these mysteries and you will either end up a suicidal nihilist or a pro-life zealot.

There’s really no room in between, despite our fevered desire to find one.

And, once you do, maybe your priorities will change a little bit.