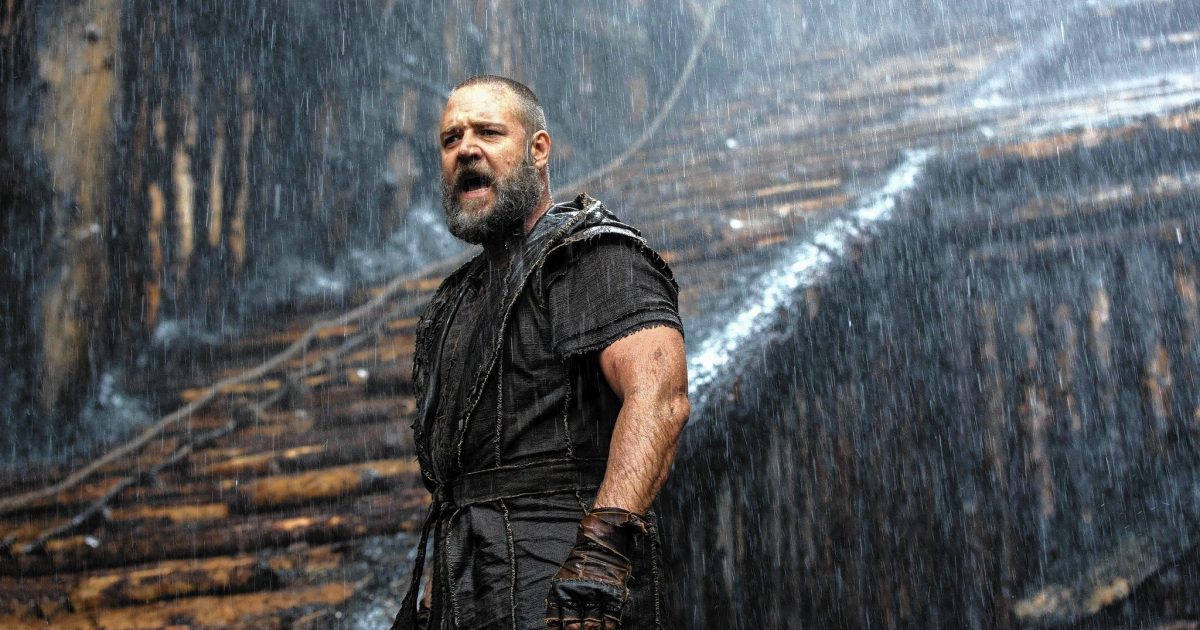 On Friday, my wife and I had a very rare date night.

Naturally, we decided to spend it being pummeled by the blaring condescension of the most insipid, absurd, unimaginative, clumsily contrived piece of anti-Christian filmmaking to come along since, well, probably just last week.

In fact, if I learned anything from Noah, it’s this: despite popular perception, you can often judge a book by its cover. Also, giant deformed rock monsters make for awkward supporting characters.

We’ll meditate on that second item in a moment, but it’s the first point that should be especially emphasized.

Christians: you’ll hear people insist that you can’t criticize the movie until you’ve seen it. Noticeably, the loudest voices in this camp are the ones who will (rather coincidentally, I’m sure) profit immensely if you meet their challenge.

You can hate this film without watching it, for the same reason that you can assume Citizen Kane is slightly superior to Need For Speed, without having seen either of them.

Just use context clues. Use your judgment. Use your money on something else.

Noah is a major Hollywood blockbuster, made by an atheist director best known for his previous flick where a mentally disturbed lesbian ballerina goes insane and bleeds to death on stage. Already, a critical person might be slightly concerned about his handling of the Bible, considering what he just did to the ballet.

These concerns grew from suspicion to reality before it was even released, when the man himself came out publicly and professed Noah to be both an environmentalist propaganda piece, and the “least Biblical” Bible film ever made.

But he forgot to mention that it’s also a terrible film.

The way I figure it, I must now convince at least two people to skip this movie in order to cancel out the twenty dollars I just contributed to Darren Aronofosky’s and Russel Crowe’s coffers.

What better way to do that than by spoiling the entire thing?

So here goes a thorough synopsis and spoiler, which will hopefully quell your curiosity and alleviate any urge you might feel to go and experience this ridiculous train wreck for yourself:

We are first introduced to the Noah of Noah on a hill in the barren wasteland of the Fallen. In a captivating and subtle initial sequence, our protagonist castigates his son for pulling a flower out of the ground, right before rushing to the aid of an injured dog.

A scraggly band of Bad Guys soon show up with the wicked intentions of devouring the animal’s flesh, because, in this story, the Height of Evil is to stave off your imminent starvation by hunting wild game. (If only they’d developed Noah’s ability to be a strict vegetarian in an environment almost entirely devoid of vegetation.)

The Bad Guys attack Noah, not realizing that he’s a vegan Martial Arts master. Noah proceeds to kick some serious butt, leaving all of the Bad Guys bleeding on the ground.

One of them looks up at him in awe and terror. “What do you want?”

I was expecting him to then whisper, “I’m Batman,” and disappear, but I realized that superhero movies wouldn’t have dialogue nearly so clichéd as this embarrassing farce.

At any rate, Noah wants justice. Of course, this is coming from the same dude who will spend the rest of the movie contemplating murder-suicide and threatening to stab babies in the face.

On the way, our heroes encounter a group of the aforementioned Rock Monsters.

The Rock Monsters — a cross between the Ents from The Lord of the Rings, Transformers, and Muppets — are fallen angels who came down to Earth to help the humans after mean ol’ God cast Adam and Eve out of Eden. The ‘Creator’ was ticked at the angels for being big softies, so he cursed them and turned them into Giant Stone Gumbies.

Christian apologists for this movie have claimed that the Rock Monsters are, in fact, “Biblical” because Genesis does make vague mention of “giants.”

That’s like turning Jesus into an Olympic figure skater and calling it “theologically accurate” because the New Testament says he walked on water.

Still, the Rock Monsters are great unintentional comic relief, so I certainly wasn’t upset to have them along for the ride.

Skimming over a few parts: Methuselah gives a roofie to Noah, prompting a hallucination about the ark. Noah and the gang and the Rock Monsters then start building the ark. More Bad Guys arrive, intending to takeover, but they’re scared off by the Rock Monsters.

In this “version” of the story, only one of Noah’s sons, Shem, boards the ark with a wife. Ham, completely wife-less, is a tad displeased at the notion of default celibacy for the rest of his life.

Eventually, he runs pouting into the woods, falls into a hole filled with corpses, and finds a girl sitting among all the dead people. They fall instantly in love — the classic “how we met” story — and the two of them head back to the ark. Unfortunately, Ham’s girlfriend gets caught in a bear trap and trampled by a human stampede along the way. Classic breakup story. Noah forces Ham to abandon her and leave her to die.

Ham is mad. He pouts some more.