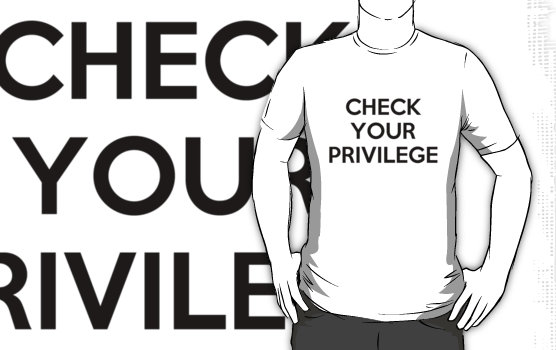 I read this email from a reader, and now I’ve spent the whole day checking all over my house to find my privilege. I don’t know, I must have misplaced it:

First I’d like to say that you are the absolute worst. I’ve got you blocked on Facebook and I’ve unfollowed anyone who Retweets your horrible bull sh*t. I think you’re a genuinely bad person who somehow stumbled upon a way to make a lot of money writing hateful sh*t on the internet. Congrats. You’re one of the internet’s most famous douchebags. Your mother must be so proud. I just want to tell you that the world has had enough of cisgender white guys whining about all of the evil women and minorities. Even though I’ve done everything to avoid your articles, for some reason I still come across them. I decided to read your last couple of posts, and all I saw was a privileged white middle class man telling women how to live our lives. You’ve been so protected and coddled that you don’t even realize how stupid you sound.

It’s easy when everything is handed to you in life. It’s easy when you don’t have to worry about rape, discrimination, microaggressions, and systematic oppression. It’s easy when OUR ENTIRE SOCIETY is set up to give you, the Straight White Man, all of the privileges and advantages. The patriarchy exists to elevate you above everyone else, and you still have the f*cking nerve to complain that women are allowed to use birth control or gays are allowed to love each other? Life is easy for you. You sit at home and blog all day. You have no idea what it’s like for the rest of us. You have no idea what you have to go through when you don’t have the benefit of being a privileged white suburban male. I know you like to laugh about all of the “silly girls” in gender studies classes, but maybe you should actually do some research on the subject yourself. I can send you my textbooks if you want. White males have been responsible for the worst oppressions from the crusades all the way to f*cking slavery, and now you cry that your “religious freedom” is violated because women are using birth control? You’re f*cking disgusting. Check your privilege, assh*le.

Go ahead and assume that everything has been handed to me.

Assume that I was issued a White Dude Membership Card, and I can pull it out in any situation — job interview, traffic court, airport security, Six Flags, etc — and automatically receive first class treatment.

Assume that I’ve been protected and coddled.

Assume that there’s a thing called ‘the patriarchy’ and its single goal is to push me and my ilk into positions of power and prestige (I’m still waiting — apparently there’s been a backlog over at Patriarchy Headquarters).

Assume that life is easy for me.

Assume that I’ve never been discriminated against, or abused, or oppressed.

Assume that the term ‘microaggressions’ actually means something, and that I’ve never experienced it, and that it makes sense for you to call me “f*cking disgusting” in the same email where you say that nobody’s ever insulted me.

Assume that everything I have — even my blogging success — is the result of my privilege.

Assume that I just sit in my house and blog all day, even though that isn’t true. A lot of the time I sit at Starbucks.

And I suppose I could make assumptions about you.

I could assume that mommy and daddy paid for your college education.

I could assume that you’ve never had to support yourself.

I could assume that you’ve never had real responsibilities.

I could assume that you’ve never lived hungry and broke and tired, like I have.

I could assume that you blame your misery and failures on the ‘patriarchy’ and ‘male privilege’ because you’re too cowardly to take ownership of them.

I could assume that, in real life, you’re as bitter and hateful as this email seems to indicate.

And, in the end, what have we accomplished? You assume that by the mere fact of being a Caucasian male I’m as privileged and elite as the wealthy son of an oil tycoon, and I assume that you’re an oblivious, sheltered, brainwashed, insufferable liberal college student. We both negate the other based on the caricature we’ve painted, and then we go on with our lives. This whole exchange proves utterly pointless, but at least we get to stay in our comfort zones where our ideological opponents are narrow and manageable categories, rather than dynamic and uncontainable individuals.

But I guess that is the point, isn’t it? The ‘white male privilege’ shtick wasn’t invented to foster a dialogue, it was invented to suppress it. You tell someone to ‘check their privilege’ because you want to discount everything they just said. It’s a Get Out of Thinking card. It allows you to push wide swaths of people into a nice little box labeled ‘privileged’ and summarily disqualify every thought and idea they bring to the table.

This is what I hate about progressivism. It’s such a dry, gray, joyless thing. It leaves no room for anyone to have an actual identity of their own. It doesn’t illuminate. It doesn’t enlighten. It doesn’t encourage open expression. It simply turns the lights off and tells everyone to shut up and play along.

Kira, life is much deeper than your college professors told you. People are vastly more complicated than you give them credit for. It’s absolutely laughable, in a pathetic sort of way, that you think you can write someone’s autobiography just because you’ve observed their skin color and their gender. Check my privilege? Check your arrogance, ma’am. Check your prejudice. Check your assumptions. Check your ignorance. Check your intellectual cowardice. Check your complete inability to prove that I have ‘privileges,’ because you know nothing about me or my life story.

Check your habit of shoving people into groups and categories.

As a matter of fact, check your dictionary.

Privilege means “a right, immunity, or benefit enjoyed only by a person beyond the advantages of most.”

Can you name me one particular right or immunity that I possess and you do not? What is one specific and tangible benefit that white males universally enjoy, while all other people are deprived of it?

I can think of many privileges (though the list is quickly dwindling) inherent to living in a first world constitutional republic. But you, I think I can safely say, are not emailing me from a third world dictatorship. So in this country, what is it that all white men are given which all women and minorities are not?

Men can be drafted and women can’t, but I’m not sure if that’s necessarily a privilege. More like a responsibility or a duty or, in some cases, a death warrant.

Go ahead. Give me one. Just one. And remember, you have to think of a benefit given by society (not nature, not God) to ALL white males.

And before you answer, consider the fact that millions of males have been sexually abused.

And consider the fact that millions of white males are impoverished, disenfranchised, unemployed, hungry, homeless, and suffering.

And consider the fact that millions of ‘privileged cisgender white men’ are depressed, distraught, and downtrodden.

And consider the fact that plenty of white males have been victimized, beaten, robbed, and murdered.

And consider the fact that 40 percent of domestic violence victims are men.

And consider the fact that affirmative action makes it legal — sorry, I mean mandatory — to discriminate against white males specifically because of their race and gender.

This white male privilege, whatever it is, better be evident even in spite of these realities, and it better hold up even when comparing trailer park Joe to Paris Hilton, or Jim the janitor to Kanye West.