I guess I’m old fashioned, but I wouldn’t let my son wear a My Little Pony backpack to school 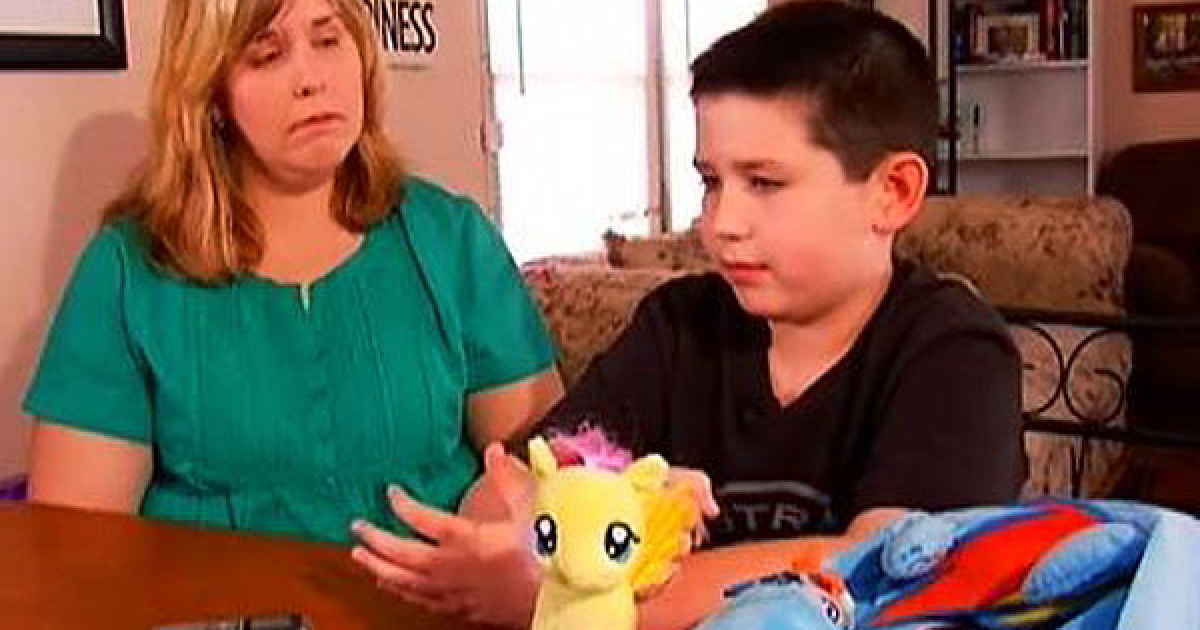 I’m going to walk down a path here, and I don’t know if anyone will follow.

I also go into this knowing that my points can often be misconstrued and twisted when the nuances in my positions are deliberately ignored.

Be that as it may, many of you have emailed to ask that I chime in on this, so here we go.

You may have heard about nine-year-old Grayson Bruce and his now-famous My Little Pony backpack. Here he is, alongside his mother and the notorious piece of apparel:

As the story goes — at least according to one side of it — young Grayson brought his My Little Pony: Friendship is Magic gear to school, which prompted other boys to bully him. Grayson says that he was “called horrible names,” “punched,” and “pushed.” The school allegedly responded by, in part, telling Grayson to leave his My Little Pony accessories at home, claiming that it was causing an undue distraction.

The way the media and Grayson’s mom tell it, the school has given the bullies a total pass.

I’m not actually sure if this is true — and I suspect it isn’t. If the kid was literally assaulted by groups of boys, I find it hard to believe that none of the offenders have been punished.

I’m not accusing the mom of dishonesty, but I do think she’s demonstrated a capacity for hyperbole, as evidenced by this quote:

She just compared her son to a rape victim. Tragically, many young boys in this country have been sexually assaulted, and it’s rather unconscionable to minimize those atrocities by likening them to a child being harassed over My Little Pony.

Now, if the world was full of sane and lucid human beings, it probably wouldn’t be necessary for me to offer the following qualifier, but it isn’t so I must:

Clearly, I neither condone nor support any person — man or woman, boy or girl — who would physically assault or verbally abuse any other person merely for their taste in cartoon programs, or for any other reason. These bullies ought to be punished and punished severely. Like the rest of humanity, I am unequivocally against bullying.

That said, I’m very uncomfortable with the reaction to this story. Seemingly everyone’s taken the same stance on this latest viral Outrage Du Jour. They say the school is wrong, the boy should keep wearing the backpack, and we should all celebrate the individuality and self-expression of a male who watches a TV show about unicorns.

Unfortunately, I can’t quite get on board with all of that. And I can give you three reasons why:

1) As long as the bullies are made to suffer serious consequences (I cannot emphasize that enough), I’m not sure I have any problem with the school’s reaction here. The administrators have been accused of “victim blaming,” but that’s just one of the new euphemisms we toss around anytime someone in authority looks to find a pragmatic solution to a difficult problem.

It would appear that we are no longer allowed to assign any responsibility to the victimized party, nor are we permitted to search for an answer that at all, in any fashion, to any extent, involves even the slightest modification of behavior on the victim’s part. Nowadays, if I am mugged and robbed while walking down a dark alley at night in west Baltimore, it would be highly offensive of you to breathe even the mildest notion that perhaps I ought to avoid such strolls in the future. The false dichotomy is presented: either you arrest and charge the muggers, or you urge caution and discernment on my part.

You are not allowed to do both anymore.

It isn’t fair or right that a boy’s enthusiasm for a show called My Little Pony — featuring unicorns named Twilight Sparkle, Applejack, Fluttershy, Rainbow Dash, and Pinkie Pie — would lead to bullying, but it does. I suppose it shouldn’t cause a distraction, but it does. What, now, must be the priority of the educational system? To protect a boy’s right to wear unicorns on his backpack, or to maintain order and focus in the classroom? It’s not as though a child’s My Little Pony gear represents some heroic stand for a virtuous ideal or important ethical principle.

It’s just a child’s cartoon show, designed and marketed towards girls, but also watched by a certain collection of passionate male fans. Is this the hill to die on? Really? As a parent — knowing that the undeniable oddity of a boy wearing a girl’s backpack will lead to a certain level of mockery and chaos among his peers — why would you permit him to continue? Because he wants to?

Sure, we don’t want to teach our kids to hide “who they are” for fear of abuse from small minded bullies, but we also don’t want to teach them that “because I like it” is enough of a justification to do something that will cause problems for other people. The other people in this scenario would be, not the bullies, but the teachers and neutral students who’d rather not be bothered by the whole ordeal.

Speaking of hiding who they are, that’s bring us to…

2) I don’t believe that Grayson’s affinity for My Little Pony has anything to do with “individuality” or “self-expression.” This is a cartoon show produced by a subsidiarity of the multinational conglomerate known as Hasbro. The Pony gear is mass produced kid’s apparel, which his mother likely bought at Toys ‘R Us, Target, Walmart, or some such place. This stuff is packaged, marketed, and sold in bulk. Individuality? Hardly. Call it whatever you want to call it, but “individuality” isn’t involved here.

As mentioned above, many bloggers and internet commenters have lamented that Grayson is being made to feel ashamed of “who he is.”

So he is defined by his affection for cartoon unicorns, is he? That backpack speaks to the very substance of his soul, does it?

This is precisely the problem with modern culture (well, one of the many problems). We all walk around following fads and trends — some of which are DESIGNED to elicit glares and guffaws from non-trendy “prudes” — and then we act as if we’ve been attacked on a molecular level when someone expresses distaste for our plastic-wrapped, calculated, corporately constructed “image.” I’m not accusing nine-year-old Grayson of falling into this category, but this does describe many in the Outraged Mass who choose to hoist up a My Little Pony backpack, and march under it like a battle flag.

To prove my point, the “Bronies” have turned Grayson into a martyr for their cause.

What are Bronies, you ask? I was unfamiliar myself until recently. Evidently, these are a sub-culture of grown men who love My Little Pony. They gather together on internet forums and discuss the show. They congregate at Brony Conventions.

They are involved in a fad that is one in a long line of similar fads, all bound by one goal: to do bizarre things, then dare anyone to call it a bizarre thing.

I, for one, will take the challenge. It is bizarre for grown men to be such passionate lovers of a little girl’s cartoon show about unicorns.

Yes, it is bizarre. But bizarre ain’t unique these days. It isn’t individualistic or bold. It is precisely what it purports to attack: collectivism.

But the boy, Grayson, isn’t yet a Brony. He’s just a kid and, for now, the show is just a show. It’s frivolous and unimportant. Better for his mother to steer him away from it before it becomes something more than that. The problem with the Bronies isn’t solely the fact that My Little Pony is girly, it’s that adults shouldn’t be obsessed with children’s cartoon shows. It isn’t healthy.

3) This next part probably won’t come as a surprise, but here it is: I wouldn’t let my son wear a My Little Pony backpack to school. I don’t think anyone should.

I wouldn’t let my son wear the backpack, I would discourage him from being a fan of the show, and I would and will guide my son away from “girly” things and towards “boyish” things. If my son wanted to wear a skirt, I wouldn’t let him. If he wanted me to buy him a Barbie doll, I wouldn’t buy it. If he wanted his room adorned in My Little Pony paraphernalia, I wouldn’t do it. Both my son and my daughter will not be able to do everything they want to do, nor “express themselves” in every way they wish to express themselves. In fact, my wife and I will have a lot to do with shaping their “selves,” thereby shaping their expression.

The one thing lost (besides sanity, reason, rationality, and coherence) in this modern idea of “genderless” parenting is that boys do need to be taught how to be boys, and girls do need to be taught how to be girls. We can’t sit back and say, “hey Junior, a boy is whatever you think a boy should be.” Junior doesn’t know what a boy should be — that’s where you come in. That’s why you’re the parent. This doesn’t mean that all boys should like to play in the dirt and read books about dinosaurs (although I think both are valuable pursuits), and it doesn’t mean that all girls should like to play dress up and brush their doll’s hair.

But there’s quite a wide gulf between rigidly forcing our children to fit every superfluous stereotype associated with their genders, and acting as though their sex ought to have no bearing on their behavior and habits at all. “Gender” (or “sex,” as science calls it) might not be relevant to everything, but it isn’t irrelevant to everything, either.

Shows like My Little Pony, starring unicorns named “Rainbow,” probably aren’t particularly useful to kids of any chromosomal composition. They’d all be better off reading books and playing outside. But they especially don’t do anything to help a boy become a man. They don’t assist a young boy in his quest to discover true masculinity. They don’t provide any answers to him.

It’s quite easy to look at these things from a utilitarian perspective. Why is pink girly? Why can’t a boy play with dolls? Why shouldn’t a boy wear makeup? It’s true that, on the surface, these all appear to be mechanically neutral things. A color is just a color, a doll is just a bit of plastic and fake hair, make up is just a dash of face paint. What’s the difference?

Yet these associations aren’t entirely inventions of toy manufacturers. They aren’t just societal conventions. And even if they were just societal conventions, I’ve yet to hear anyone articulate a good reason to dismantle them. As Chesterton said, modern progressives tear down a fence without knowing why the fence was erected in the first place. And where does that leave us? With more confusion and listlessness, as far as I can tell.

Still, one kid watching My Little Pony can’t lead to the utter destruction of culture and tradition.

I’m not saying that.

I’m not the one making a big deal out of this.

I’m just trying to offer a different perspective, even if it’s the perspective of a dwindling minority.

PREVIOUS COLUMN
The Great Homeschool Convention in South Carolina begins tomorrow
NEXT COLUMN
I paid to have babies murdered and all I got was this coat hanger necklace?