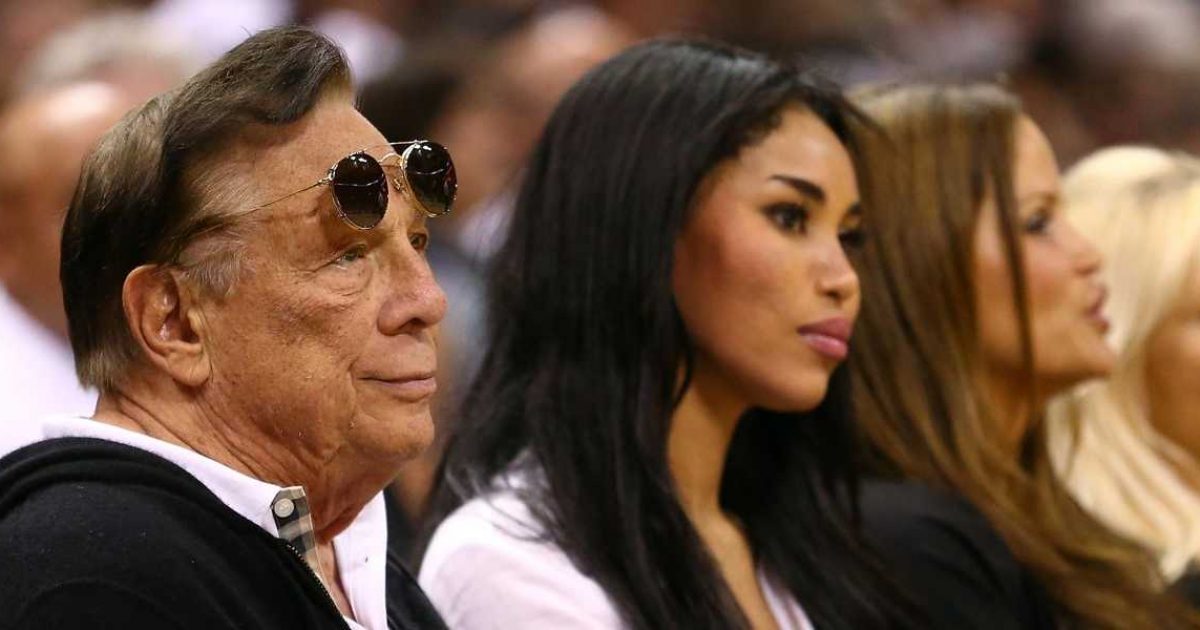 It’s really a fascinating thing, when you think about it.

Even a culture like ours — a culture dedicated to hedonism and relativism — has to put on a show every once in a while and pretend it has some semblance of a moral standard. It shows you that those philosophers and theologians were actually onto something when they wrote about Natural Law.

Deep down, in the pit of our being, there exists a need to be good and virtuous; but if being good and virtuous is too hard, then at least we need to find a halfway convincing substitute. Only demons and psychotics would stand and openly proclaim their own evil — the rest of us can act the part, but we still feel the urge to get up and play Morality Charades on occasion.

That’s what comes to mind when I see the reaction to the story about Donald Sterling. If you don’t watch the news (and these days I highly recommend that you don’t), I’ll fill you in on THE SCANDAL OF THE CENTURY:

Sterling is an old, crazy, rich, (alleged) racist who happens to own the LA Clippers. Being old, crazy, and rich, and living in California, he also has a pretty progressive love life. He left his wife a while back and started shacking up with his young west coast mistress. Now, his wife has quite unfairly accused the mistress of gold-digging, all because she just so happened to fall madly in love with a rich married man who showered her with Bentleys, diamonds, and cash.

(It happens to the best of us. Stop judging.)

The wife filed a lawsuit against the mistress, and the mistress allegedly swore to ‘get even.’ Getting even, in this case, evidently involved coaxing her lover into making some very inane and very racist comments, while secretly recording the exchange. To give you an idea of just how inane and racist: Sterling allegedly tells his *minority* mistress that he doesn’t mind if she has sex with minorities, but he doesn’t want her to be seen in public with them.

Well, this audio tape SOMEHOW made its way to that bastion of journalistic integrity known as TMZ — although the girlfriend totally had nothing to do with that, she says.

In a normal and sane society, this sordid soap opera would never be discussed outside of gossip magazines and entertainment shows, because there’s nothing very newsworthy about it. A wealthy, morally bankrupt adulterer in Los Angeles professed some unsavory views, behind closed doors, to his manipulative morally bankrupt girlfriend.

Donald Sterling can say and think whatever he wants to say and think. Given his situation, I’m not particularly surprised that he says and thinks offensive things. In fact, his overall lifestyle is far more repugnant than his ludicrous statements about black people.

(*Note* this post originally identified his wife as his “ex-wife.” They are not divorced, I was mistaken. This man is publicly breaking his marriage vows, but still we find his discriminatory racial views to be the most offensive thing about him.)

We permit and even celebrate most forms of evil and debauchery in our society, so our Moral Outrage energy is stored, ready to be unleashed anytime an old white guy utters something untoward about minorities. Having removed sins like baby-killing, pornography, sex-trafficking, and infidelity from the ‘Things to Get Upset About’ column, this seems to be among the only universally-recognized evils remaining.

I guess that explains why the media has pushed this to the front of their headlines, and the President of the United States of America took time out of his trip to Asia to bloviate about it.

And, since I love nothing more than to spoil an overdone, media-hyped Outrage Party, I have a few comments of my own to make:

1) President Obama jumped onto this story immediately after the gossip merchants at TMZ broke the ‘news.’ You’d think, as the President of the United States on an important trip overseas, his remarks would be along these lines: “Yeah, that guy said some messed up stuff. Good thing he’s not an elected official, no crime was committed, nobody was hurt, and none of this has any relevance to the lives of any American who isn’t dating Donald Sterling. Next question.”

That’s how a president who respects his office might respond. But a president who never misses an opportunity to reinforce his progressive racial narrative would instead give a lengthy and thorough statement, which includes this little gem: “The United States continues to wrestle with a legacy of race and slavery and segregation that’s still there — the vestiges of discrimination.”

Besides, when it comes to commenting on domestic scandals, President Obama will never live down his cowardly refusal to speak out against Kermit Gosnell. Here was a man who, for thirty years, murdered black infants in his Philadelphia abortion clinic, while his activities were allowed to continue because of the complacency and tacit approval of local, state, and federal agencies. Here was a man who segregated his waiting room by race, and gave better, safer treatment to white patients. Here was a man involved in a murderous scandal that implicated — and still implicates — every level of political authority, and resulted in hundreds of born infants being decapitated, stabbed, and drowned in toilets.

What did Obama say about it?

The ONE time his comments would be needed, warranted, and appropriate, and he declined

In all three of the cases where he did comment, the facts weren’t yet fully known, and the incident had no relevance outside of the area where it occurred. In Gosnell’s case, the facts were established, and the incident encompassed a wide range of local, state, and federal authorities. Yet on the first three he pounced, while on the last case he ran for the hills.

That’s all you need to know about Barack Obama.

2. The LA City Council is drafting a resolution calling for the NBA to sanction Sterling, and labeling his comments as, somehow, a violation of ‘human rights.’ Because we all have a human right to… not be insulted by people in the privacy of their homes…?

The NBA can do whatever it wants here. I don’t care. However, no government authority has any business getting involved in any capacity whatsoever, unless there are laws in Los Angeles against telling your girlfriend not to go to basketball games with Magic Johnson. I don’t think any such law exists, but I know that a California law against secretly recording private conversations does exist. Therefore, interestingly, if the government steps in at all, the law requires them to step in on behalf of Donald Sterling.

4. Various rappers have come out of the wordwork to express their dismay over Sterling’s remarks. It’s impossible to ignore the irony when we get this kind of faux-indignation from the precise people responsible for hurting more black kids in more ways than a thousand Donald Sterlings ever could. Racist NBA owners might result in hurt feelings, but the self-destructive culture peddled by these record industry predators results in funerals and prison time for black inner city children. I’m happy to know that Snoop Dogg — writer of such poetic lyrics as “b*tches ain’t sh*t but hoes and tricks” — thinks that Sterling should be ashamed of his repulsive rhetoric. Now that we know how sensitive Snoop Dogg is, let’s just hope he never listens to a Snoop Dogg song.

Lil Wayne also came forward to register his disapproval. This is the same guy who recently wrote lyrics where he called Emmett Till — the 14 year old black kid murdered for flirting with a white woman in the 50’s — a ‘p*ssy.’

But Mr. Wayne is, you know, super sensitive to the historical plight of black Americans.

5. If anything should come of this ordeal, it ought to finally be the complete dismantling of the NAACP. The organization was scheduled to give Sterling a SECOND ‘lifetime achievement award’ in a few weeks. They’ve since rescinded, but their backtrack doesn’t get them off the hook. If Sterling really has a lifetime of achieving things in the name of civil rights and racial tolerance, wouldn’t they perhaps be a little hesitant to throw the guy under the bus? They sure seem to have cut Sharpton a ton of slack. But if he was only going to be given the honor because he’s a wealthy guy and the NAACP is nothing but a political arm of the Democrat Party, then the move makes sense. So which is it, NAACP? Are you betraying this man who, as you formerly claimed, has dedicated an entire lifetime (TWO lifetimes, in fact) to achieving racial unity, or are you a bunch of Democrat shills doling out political favors?

Hmmm, this is quite the perplexing riddle, isn’t it?

6. Sterling is a jerk. There’s no doubt about that. But I am extremely uncomfortable with seeing a guy get penalized for private, illegally recorded comments he made. Even if I find the comments to be abhorrent, I just don’t like how it feels when we take somebody down based on something they said in their living rooms, off the record.

I’m consistent about this, too. When liberal Alec Baldwin was recorded berating his daughter a few years ago, I said we should be angry at what he’s said publicly, but what he said privately to his family is none of our business. When Mel Gibson was crucified for screaming at his girlfriend a while back, I said the same thing. Now, I repeat those sentiments.

There is not a person on this planet who hasn’t made ‘offensive statements’ to their loved ones, privately, in their own homes. I’ve never said the things Sterling said, because I’m not a senile, adulterous, racist, but I’m sure I’ve made comments to my wife or my close friends that I wouldn’t make in a business meeting, or on TV, or on Facebook.

It’s a troubling precedent when we start penalizing people for essentially being entrapped, illegally, by an intimate confidant. The NBA might have the authority to ban Sterling for life and force the sale of his team, but the move is nonetheless problematic.

Go ahead, get emotional and tell me I’m making excuses for Sterling. I’m not. I only hope that nobody has to make excuses for you one day if your private conversations are illegally dumped into the public square.

This is a steep and slippery slope.

PREVIOUS COLUMN
Behold: the two absolutely worst arguments against homeschooling
NEXT COLUMN
13 things that every little kid should worry about