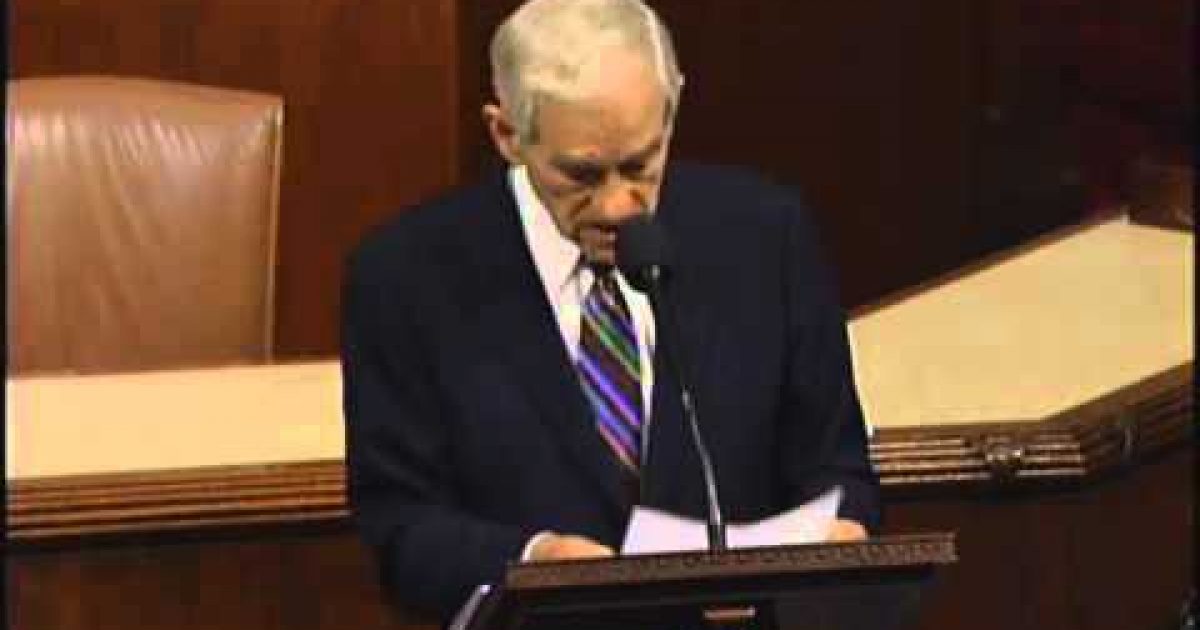 Ron Paul delivered his final speech on the House floor yesterday. I watched the video and read the transcript. I thought it had the same tone, scope and depth of George Washington’s farewell address in 1796. In fact, Paul is one of the few — if not the only — modern politician that can be aptly compared to the Founding Fathers. That’s not meant as flattery, that’s simply an objective statement of fact.

I respect Dr. Paul for many reasons but I think it’s his patience that I admire most. If I was him, at some point in the last 30 years I think I would have lost my damn composure, stood up at the podium and shouted “WHAT THE HELL IS WRONG WITH YOU MORONS?! I’M TRYING TO GIVE YOU BACK YOUR LIBERTY! DON’T YOU GET IT? WHY ARE YOU RESISTING?”

Then I would have tore my shirt off like the Hulk and run screaming into the woods where I’d have lived the rest of my days under the shelter of the foliage subsisting on grubs and wild berries, having given up on humanity all together.

But that’s probably why I’m never going to be a politician.

Paul, on the other hand, remained calm. Remained consistent. Remained thoughtful. Remained honest. Remained right. Remain principled. And that’s the point. So many people failed to understand that Ron Paul seemed “nutty” or “weird” to them simply because he had principles. It’s not the principles that were weird. It’s the fact that a politician had them that seemed weird.

Before we get into debating the philosophical merits of his ideology, the most important point is that he actually HAS an ideology that he’s always put ahead of his own desire for power and prestige. That alone should have been reason enough to elect him president. Rhetorically we all want a politician who’s “in it for the people”, who isn’t an egomaniac and a power hungry sociopath, but in actuality that’s evidently precisely what many of us want. That’s why the mild and humble Ron Paul was left on the fringes while the American electorate casted their lots for guys like Obama and Bush and Romney and Kerry and Gore. We choose stupidity over thoughtfulness, fraudulence over sincerity, deception over honesty, superficiality over profundity: it’s the same old tune humanity has been whistling since Adam.
I don’t know why we feel the need to mock, deride or ignore the men who put truth above all. I don’t know why wisdom seems so foolish to fools. I don’t know why we say we want one thing and when that thing appears we push it aside for the thing we say we don’t want. We are a mystery to me.
Ah but yes, you could have voted for the man if not for his “wacky” foreign policy or his “strange” economic theories. Personally I don’t know what’s so wacky about a foreign policy that actually takes into account the lessons of history, both recent and ancient. And I don’t know what’s so strange about an economic theory that puts private property above redistributionism and liberty over dependency. But that’s really here nor there. The fact is Ron Paul actually believed in the beautiful phrase “consent of the governed”. I never saw him pump his fist and yell “power to the people!” but his entire career was dedicated to that idea.
He was a once in a lifetime kind of politician. He wanted to assume the throne in the White House and immediately convert the throne back to a non-descript office chair. He wanted to destroy the palace from the inside and free the serfs. He wanted to throw the ring into Mount Doom.
The odd thing is, even his opponents don’t deny this about him. Yet they still opposed him. Again, we are a mystery.
It’s the sad reality that society generally punishes those that question the status quo. Sure we all use phrases like “outside the box” with affection but the fact is we love our box and hate anyone who threatens to blow the lid off of it.
That’s not to say Paul didn’t have success politically. He’s one of the most influential politicians of the modern era. He has a legion of supporters, many of them young, and earned their support substantively, not stylistically.
All the same, he was rejected by the majority of America. Proving again that the majority may rule but they really suck at it. If this was a Hollywood film Ron Paul would have taken the White House in the end and won the honor and admiration of us all.
But this is no movie.
Instead he delivered a 45 minute address, received a smattering of faint applause, a moderate amount of half interested media coverage, and then he walked off the stage. And that’s probably it for him. Although not for the movement he sparked.
So, while I know he’ll never read this, I’d still like to say to the good Doctor: Thank you for your service. And unlike most of your colleagues, it truly was a service.
Facebook Twitter Reddit Pinterest
PREVIOUS COLUMN
Bankrupted Nation Faces Possibility of Bankruptcy
NEXT COLUMN
Bless us O Lord and these thy gifts, NOW GIVE ME AN iPHONE