Everyone, please help me make this person infamous 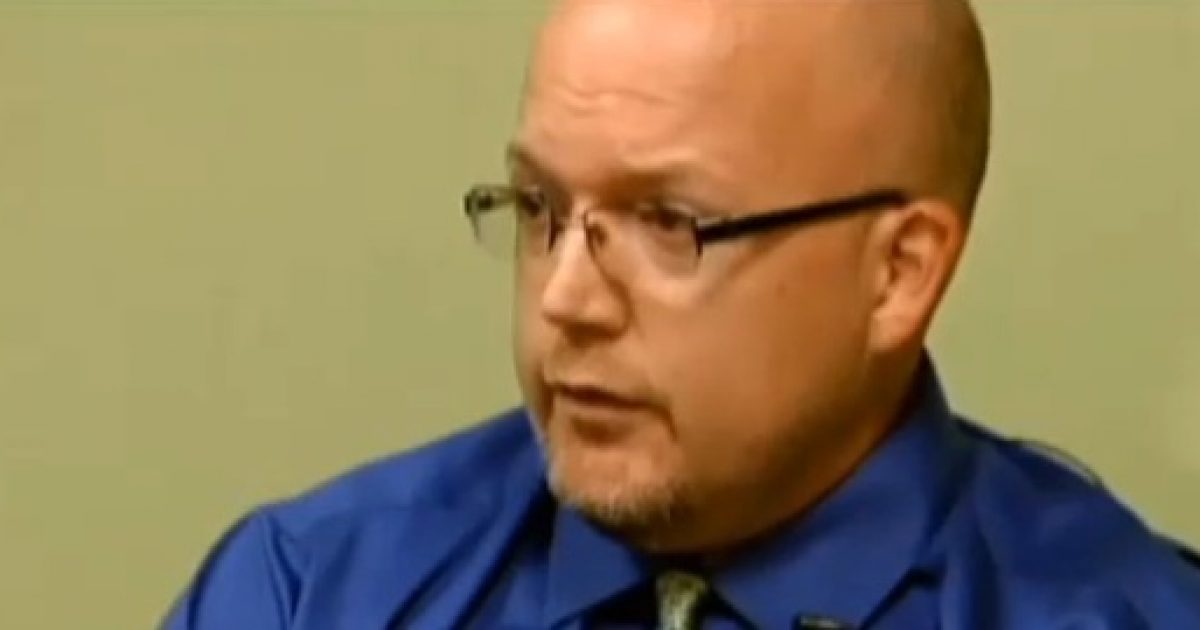 Jared Marcum was arrested and charged with a crime for wearing an NRA t-shirt to his school in West Virginia.

Justin Carter, a teenager in Texas, spent months in jail after making a sarcastic (yet inappropriate) joke on his Facebook page.

In Virginia, a 10 year old boy was arrested and charged for bringing a plastic toy gun onto a school bus.

Christian Adamek, a 15 year old student, was threatened with being put on the sex offender registry for streaking at a high school football game. He hanged himself a few days after his arrest.

Cody Chitwood, 17, faces 10 years in prison for having a tackle box with fishing knives — in his car, parked outside his school.

I could go on and on and on. Everyday, children and teens are expelled, arrested, and jailed for games, jokes, innocuous behavior, and harmless juvenile antics. We have a “zero tolerance policy” for childhood mischief, and it is enforced ruthlessly.

“Sorry ma’am, we’re going to ruin your son’s life for having a pen knife in his glove compartment. We know he’s a good kid, but we’re going to lock him in a cage and derail his future anyway. Them’s the brakes. Ain’t nothin’ we can do. Deal with it, lady.”

Yet, in this rigid environment where misshapen breakfast pastries and plastic toys are taken as potentially lethal; where there is “zero tolerance” for anything that might be construed as a threat, how could a school employee get away scott-free after being caught sending hundreds of deranged, sexually charged text messages to a 15 year old student?

How it this possible? The t-shirt kid spends a few nights in jail, and this pervert get to stay home with his (I’m sure, quite proud) wife?

Allow me to introduce you to Kentucky’s own former Holmes High School Band Director Jared Murray:

Late at night, early in the morning, during class, Jared Murray, for several weeks at the beginning of the school year, bombarded a 15 year old student with all sorts of text messages. He now claims these were all “taken out of context,” and he was just trying to foster a “father-daughter” relationship with the young lass. He says there’s nothing criminal about the conversations he had with her. I’ll show you a few of the hundreds and hundreds of text messages. You be the judge. You tell me if they require further “context”:

“So when you moving in?”

“We would have tons of the fun.”

“I miss you already.”

“I’ve grown really attached to you. So when I say I love you, I truly mean it.”

“You’ve grown to be a major part of my life.”

“Just making sure our business stays with us.”

“These are the days I want to take you home and give you the love you deserve.”

“So our date is official?”

And you get the gist.

Remember, kids get ARRESTED for bringing TOYS to school. This dirty old deviant is stalking a minor, and what’s the penalty?

Nothing. Nada. End of the story.

He was suspended — with pay (of course). Then he resigned. The Kenton County Commonwealth Attorney says the texts are “inappropriate” but “not criminal.” The investigation is over. No charges will be filed. Nobody will look into it any further. This all happened in August, it came to light only a few weeks ago, and the matter is already settled.

[*UPDATE* Many people have emailed the prosecutor about this case and received responses. I respect the fact that the man has taken the time to actually answer. He says Kentucky law ties his hands and he can not do anything. He insists that he wishes he could put him away, he hates what he did, but he has no recourse. This all hinges on whether the Band Director Perv “solicited” sex. Personally, I still believe his texts are CLEAR and EXPLICIT in that regard. He says the law has hamstrung him by so narrowly defining what constitutes solicitation. Thank you, everyone, for getting on top of this. This story still needs to be shared — whether you share this post or any other news item about it — so that Jared Murray can’t ride off into the sunset, get another job somewhere, and victimize another child. I don’t think we need to send anymore emails to the prosecutor. He suggests we contact the Kentucky Legislature: http://www.lrc.ky.gov/ and push them to create laws that actually protect children. That’s a good idea, and I’m going to do that. The system is entirely backwards if it protects creeps like Jared Murray.]

I don’t know, maybe I’m crazy. I railed about this on my show and I was greeted with a whole bunch of apologists who told me that it isn’t necessarily THAT bad because, after all, she’s 15, and, you know, 15 year old girls can be pretty precocious these days. I even had one guy tell me that, for all we know, SHE pursued HIM.

That’s right, the 15 year old girl is the predator here. Not her old, bald teacher, sending her texts late at night, gushing about how much he “loves” her.

This is an outrage and an injustice. The victim’s family has apparently been targeted for abuse by some members of the community, while this predator smirks in front of cameras, expressing not the slightest bit of remorse. This man, I believe, is dangerous. You don’t just wake up one day and say, “hey, I think I’ll go find myself a 15 year old girl to stalk!” This is the swamp you land in after sliding down a slippery sexual slope for many dark, deranged years.

So, how many other minors has he targeted? What if I looked on his computer — what sort of files and images would I find? Is it remotely likely that he’s been a fine, upstanding citizen until now?

Doubtful. Very, very doubtful. Yet these doubts can never be confirmed, because the justice system has no interest in protecting children from men like Jared Murray.

You’re telling me there isn’t ANY law that applies to this case? You’re telling me that we have to actually sit and wait for the perv to molest his victim before we do anything? These texts weren’t just “inappropriate” — they were a grown man manipulating a minor for sexual reasons. HOW IS THAT LEGAL? And, for that matter, are we so sure there was never physical contact of any kind? These messages seem to indicate a certain level of “familiarity,” but, hey, I’m no detective.

That’s why I’m turning to you, internet. Share this. Make this story famous. Make Jared Murray infamous. I don’t know what will come of it, but I can’t just sit here silently while this bloated degenerate blatantly abuses a child, and receives no punishment.

Again: we arrest CHILDREN for bringing plastic guns to school. We have “zero tolerance” if they stray over the line. This man didn’t just cross the line, he charged through it and crashed loudly right into full-on sexual predator territory. Where’s the “zero tolerance” for that?

One last note. Don’t tell me “oh, well she’s 15 and it was consensual — not that I’m excusing it.” Yes you are. If you say that, you are excusing it. That’s precisely what you’re doing. And it’s disgusting. There is NO context that makes this OK. There is NO excuse for it. There is NO gray area.

“These are the days I want to take you home and give you the love you deserve.” That is an adult petitioning a minor for sex. That’s all that is. There’s no chance of that being anything else. There is no other way to interpret that. He is saying, “I’d like to have sex with you, child.”

And he faces no criminal penalty. This is injustice. It can’t be allowed to go unnoticed. Don’t let it.