Breaking: Taxes Can Cure AIDS, According to Random Naked People 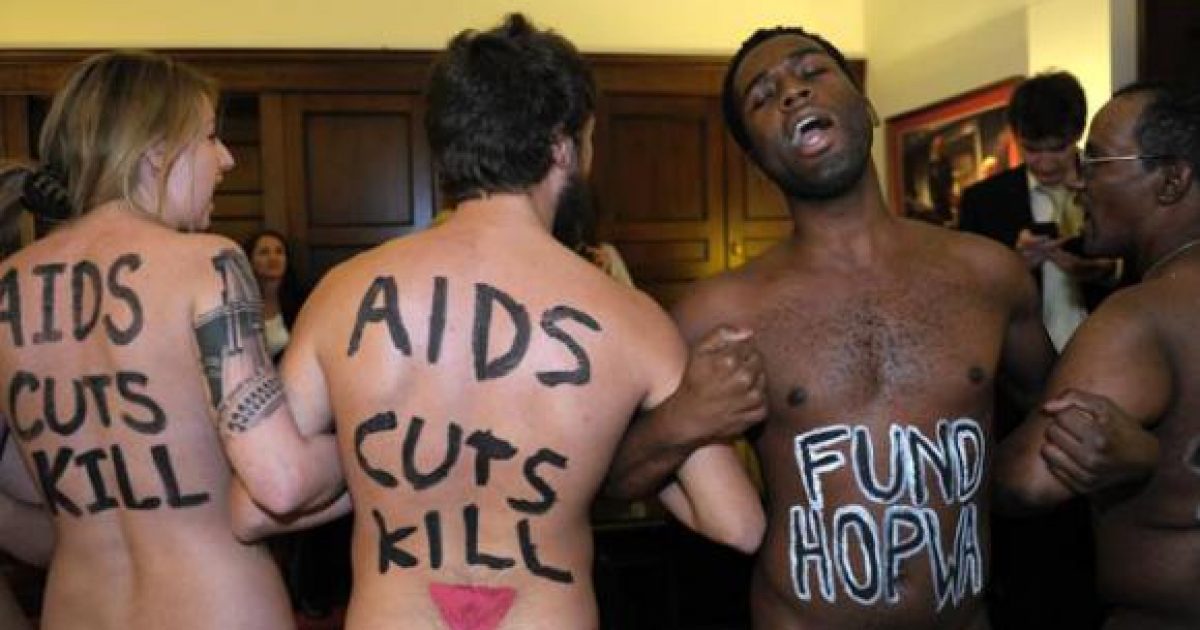 A flock of nude morons (which is a great idea for a band name, by the way) stormed John Boehner’s office today protesting potential budget cuts to AIDS research.

They explained themselves through their profoundly insightful chants: “That’s why we have to be so nude, budget cuts are really rude!” Brilliant. And if budget cuts are “rude” what do you call a 16 trillion dollar debt? Polite? Gentlemanly? Chivalrous?

They kicked it up a notch when they started shouting, “No more budget cuts on our backs. End AIDS with a Robin Hood tax!”

Really? We can literally end AIDS simply by taxing rich people? Fascinating. And once we’ve taxed our way to health and prosperity can we keep on taxing until we achieve immortality? Why, I bet if we tax enough we could all turn into fairies and flutter away to a land of sugar and honey and happiness and rainbow colored dolphins!

Come on guys, let’s go ransack and pillage a path to the Promised Land!

Look, I’m not going to sit here and waste my time seriously addressing the points raised by the naked hoard but I do think this incident is instructive. Although most liberal Statist type folks may not be inclined to go expose themselves to the Speaker of the House, I think they share many of the same presuppositions.

The first is that somehow, despite a national debt that would take a pile of money big enough to touch the sun to pay off, the government still isn’t spending enough. Despite a budget of over 3 trillion dollars a year, the budget still isn’t big enough. Despite the fact that the government has grown exponentially under every administration since Hoover, our problems still somehow stem from a LACK of bureaucracy. Despite the fact that we pay taxes everyday on everything all the time everywhere, we still aren’t paying enough.

I suppose there’s no way for me to reach the people who hold this view because, inevitably, whatever I say will be said from the vantage point of someone fully and frightfully aware of reality. In other words, I’m awake and they’re in a self induced persistent vegetative state. Some scientists have theorized that they still have functioning minds and active brainwaves but my experience suggests otherwise. I might as well try to reason with a door knob before I attempt to have a discussion with someone who thinks a government that requires 3 trillion dollars a year to operate is too small and too frugal.

The second and most troubling presupposition is a logical fallacy that works like this: One who opposes the government doing ‘A’ opposes ‘A’ being done in general. This nonsensical belief is so ingrained by the Indoctrination Machine known as public school and pop culture that a Statist gets to the point where he simply can’t understand that you can oppose food stamps but still support feeding the poor. He certainly can’t fathom that you could criticize the Department of Education but still believe kids should be educated. If you try to explain to him that, in fact, in many instances you oppose government involvement in ‘A’ precisely BECAUSE you think ‘A’ is so important, he’s likely to break out in a feverish sweat and resort to the trusty fallback option of calling you some sort of ‘ist’ (racist, sexist, etc).

So getting back to the naked people, I’d first like to assure them that John Boehner is not looking to make any serious cuts to government spending in any arena at all. Boehner knows as well as any politician and any petty tyrant from any era of history that money = power, and he doesn’t plan on relinquishing either. There’s a terrible rumor being spread that Republicans believe in fiscal conservatism and limited government. I don’t know who originally came up with this libelous accusation but, trust me, it isn’t true. Republicans love taxes and they love government and they’ve got a 150 years of history to prove it. In fact, Republicans are very adept at weeding out and exiling the libertarian infiltrators. Many times they’re harsher and more ruthless in their treatment of constitutionalists and conservatives than Democrats are. Just ask Ron Paul.

A crazy plan, I know, but it’s so crazy it just might work.