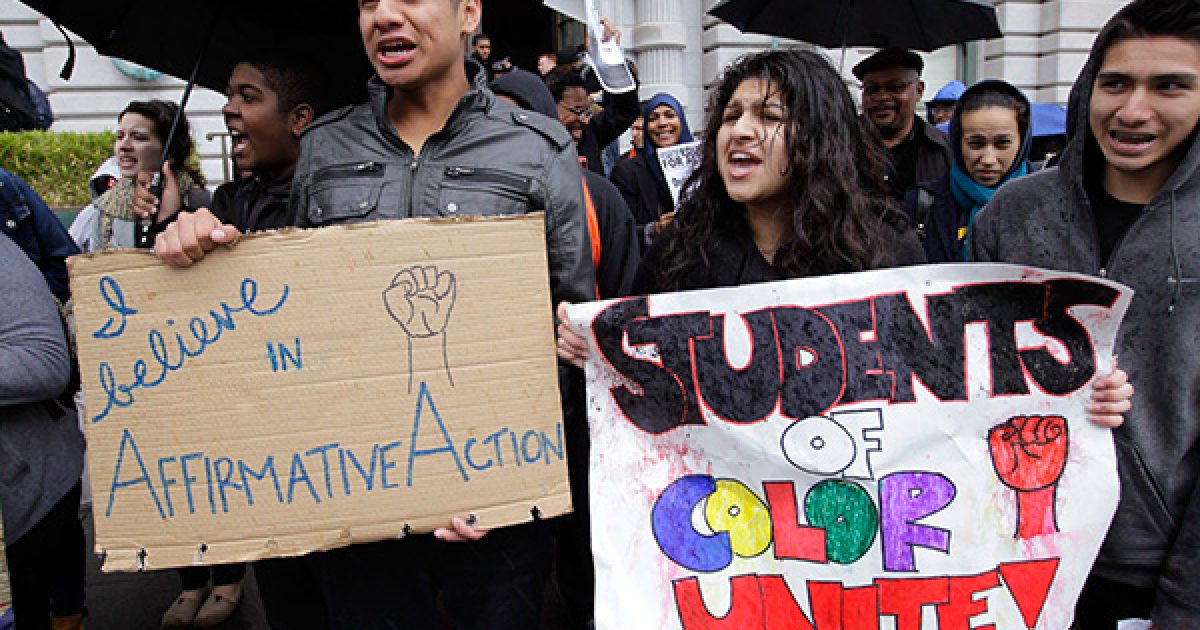 They didn’t rule on affirmative action itself, but merely affirmed the voters’ right to have a say in our democratic system. Predictably, a mob of left-wingers immediately took to the internet to advocate for racial tolerance by saying a bunch of racist things about Clarence Thomas.

In the mind of Liberal Whitey, not only should we have a paternalistic mechanism in place to treat minorities like children who need special treatment, but we should even disallow the citizens of individual states from getting to decide for themselves whether their education system will be based on racial quotas and institutionalized discrimination.

Discrimination: treatment or consideration of, or making a distinction in favor of or against, a person or thing based on the group, class, or category to which that person or thing belongs rather than on individual merit.

To call it ‘reverse’ discrimination is to insinuate that ‘real discrimination’ is an innately white phenomenon. I know that such a view is actually held by many Americans, and actually taught in our schools, but it is a patently idiotic notion. Discrimination rears its ugly head in every corner of the globe, whether the white man is present there or not. If you want to blame white people for something, blame us for ironic bumper stickers and Aaron Sorkin TV shows. Neither of those would exist in a world without honkies. But discrimination? Find me a race not guilty of it, and I’ll show you a race not of this Earth.

Affirmative action is discrimination. It’s also bigotry, and strangely enough, the people mostly victimized by the bigotry are precisely the ones supposedly helped by the discrimination. That’s what angers me the most about the whole ludicrous affair. Can you think of anything more belittling than the white folks in charge of universities counting their students like faceless statistics, measuring them based on their skin color, and then decreeing that they need a few more blacks to fill the quota?

This is equality? This is progress? Bureaucratic calculations predetermining the exact allotment of skin pigmentations — this is the sort of diversity we want in America?

I’m repulsed by it, as any American ought to be. I struggle to even write a few paragraphs criticizing affirmative action, because the entire thing is so nakedly degrading and blatantly self-defeating.

It depresses me that discussions about affirmative action always devolve into arguments over whether it ‘works’ or not. It doesn’t work, and the fact that we’ve had affirmative action policies in place for decades, yet much of black America still struggles so mightily, proves that point. Even liberals are starting to understand the strategic disaster that affirmative has proven to be. But, really, what kind of question is that? Does it work? We’re talking about people here, not cows. Not robots. Not numbers on a spreadsheet. Even if discrimination works, it still doesn’t work. Even if the end is desirable, it can’t justify the means if the means include elevating a certain group through the targeted utilization of systematic racism.

Affirmative action is designed to ignore a person’s merits, their achievements, their character, their ambition, their efforts, and instead rank and categorize them according to the color of their skin. This is wrong. It doesn’t matter who it’s supposed to benefit. It benefits no one, but it doesn’t matter if it does benefit someone. It’s wrong. It’s wrong to discriminate against someone or for someone simply because of their ethnicity. This is basic stuff, my liberal friends. These are basic, fundamental ethical concepts. It doesn’t matter if the discrimination is supposed to combat discrimination. That’s like cheating on your wife and telling her you only did it to address her infidelity.

“Hmmm, Mrs. Johnson, you say your husband is deceitful and abusive? Well, I recommend that you employ a policy of reverse deceit and abuse against your husband. Problem solved. That’ll be 600 dollars.”

But, if I wanted to give a few reasons, I’d point out that the term ‘affirmative action’ first appeared in a Kennedy executive order, which called for people to be given opportunities “without regard to their race, creed, color, or national origin.” This is notable because the current iteration of affirmative action is exactly designed to ensure opportunities by taking special regard for a person’s race, color, and national origin.

And if I wanted to give more reasons, I’d bring up the Jews and Asians, who are both ethnic minorities, and have both experienced enormous hardship and prejudice, yet they both are, in fact, disproportionately represented in ‘higher education,’ not to mention fields like medicine and engineering. If the university system is stacked in favor of white males, why have we wielders of white privilege made such a glaring exception in their cases? Actually, they’re such an exception, that now affirmative action policies require institutions to discriminate against them in order to stop them from being too successful.

And if I wanted to give still additional reasons, I’d say that it’s absurd to think that universities are run by white supremacists whose inherent racism needs to be regulated through affirmative action policies, when it’s the universities that peddle white guilt more passionately than any other institution in America. Many colleges go so far as to teach that all white people are racist, no matter what, without exception. Until recently, the University of Delaware, for instance, required that all residents be indoctrinated to radical left-wing racial theories, even if they weren’t taking any classes on the subject. And you’re telling me these places that convince white people to hate themselves and their heritage are actually bastions of white privilege? I think we must be working with drastically different understandings of the word ‘privilege.’

And if I wanted to give even more reasons, I’d mention that you’re putting a minority student at an extreme disadvantage when you throw him into an academic environment because he fills your skin tone quota, but isn’t otherwise prepared to handle the workload.

And if I wanted to offer yet another reason, I’d say something about the fact that affirmative action makes wild assumption contingent solely on race, while taking no account of other factors that might put someone at a greater disadvantage. We’re left with a ridiculous dichotomy where a black male from a wealthy upper class family is given the benefits of affirmative action, over the son of an impoverished white single mother, or the daughter of a poor Japanese fisherman.

And if I wanted to keep tossing out reasons, I’d probably tell you that the very term ‘ethnic minority’ is virtually impossible to quantify. Elizabeth Warren claimed she’s a Native American. Sure, she’s a shameless, lying, Socialist, but who’s to say she doesn’t have some minority blood? Who’s to say I don’t count as a minority? My ancestors came from Ireland, and weren’t exactly greeted with open arms when they arrived on our shores. At what point in the lineage does a family lose its minority status? Is it all based on skin color? Is the child of a Polish immigrant less an ethnic minority than Barack Obama, the wealthy biracial man raised by his white mother? What if Obama’s skin complexion more closely resembled his maternal side? Would that make him less a minority? Who is the arbiter of these things? Who decides? Does any of this make even the slightest bit of sense? Have all our brains simply turned to mush?

If I wanted to give a bunch of reasons why racial discrimination is a bad idea — aside from the fact that it’s just a generally repugnant practice — I’d probably say all of those things.

But I won’t, because it shouldn’t be necessary.

Affirmative action is an atrocity.

Also, college is often a terrible waste of money, so this whole conversation should be a moot point.